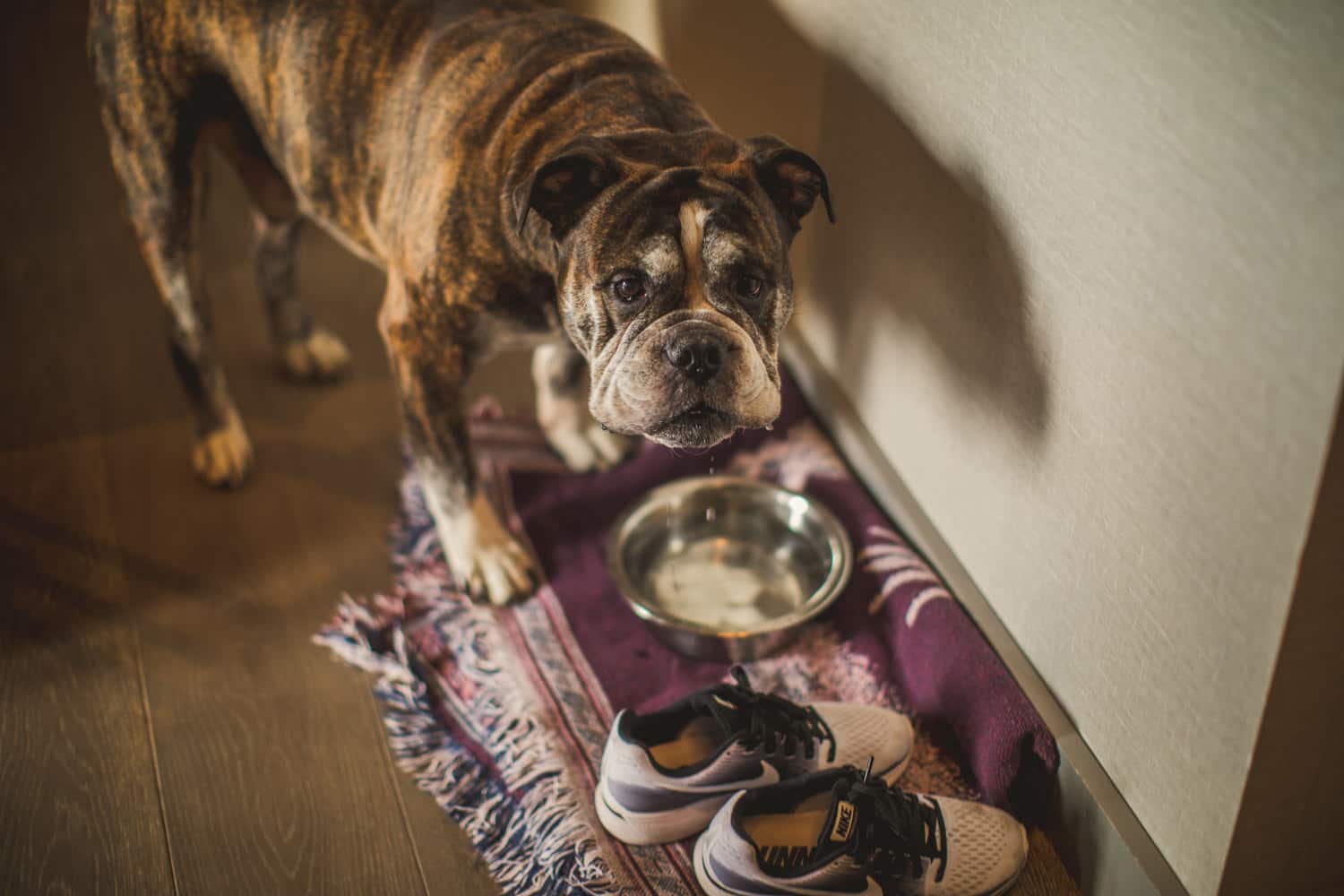 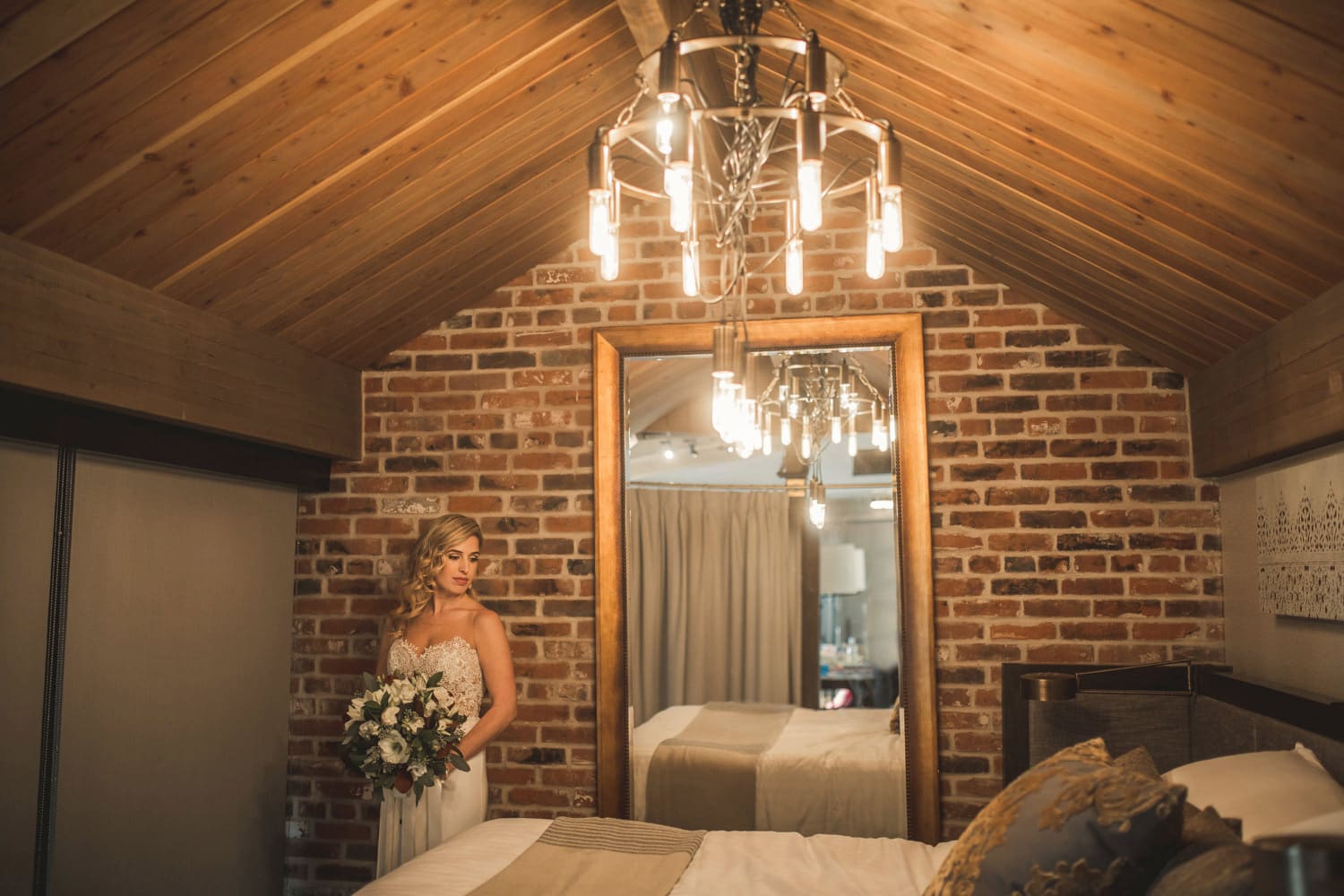 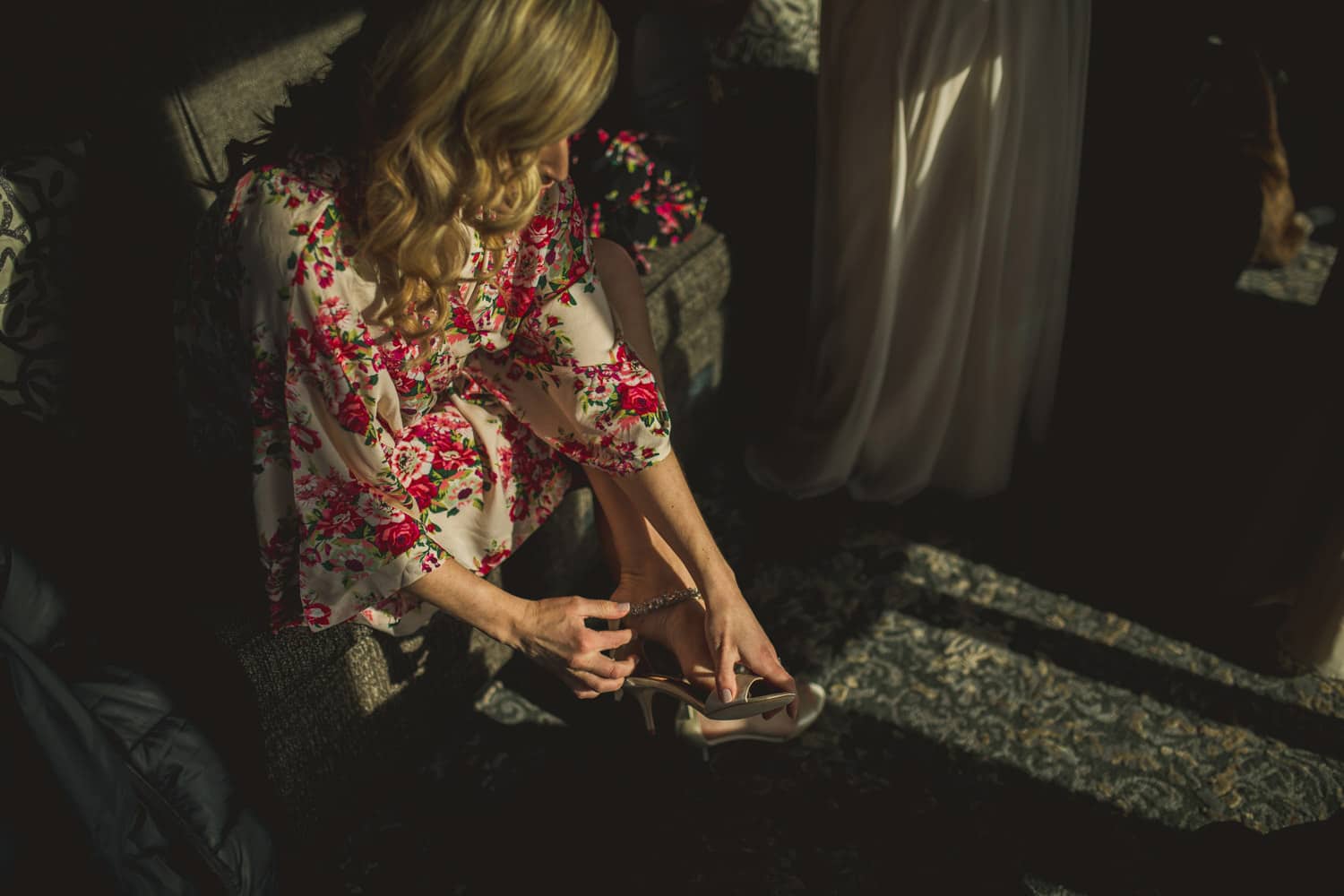 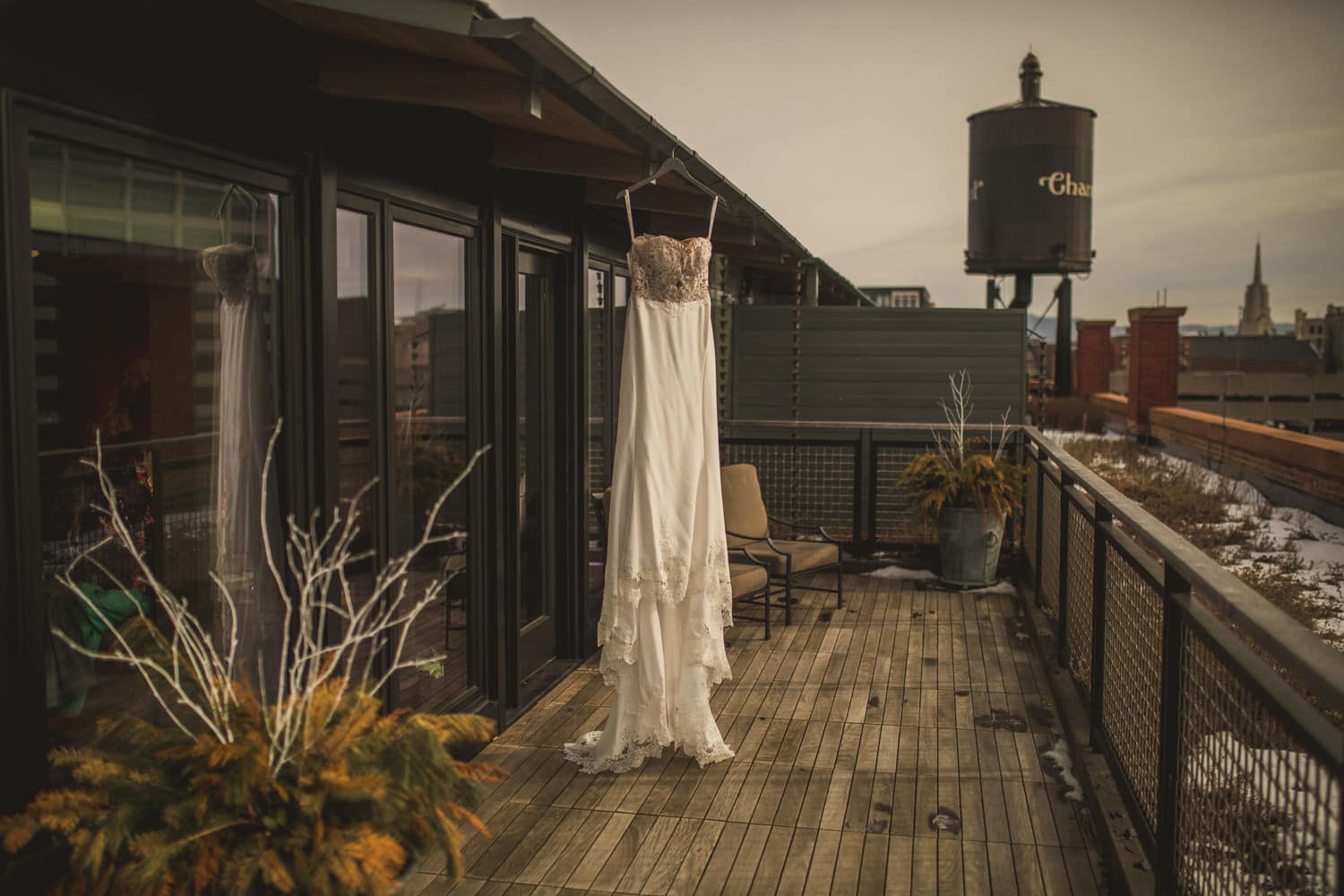 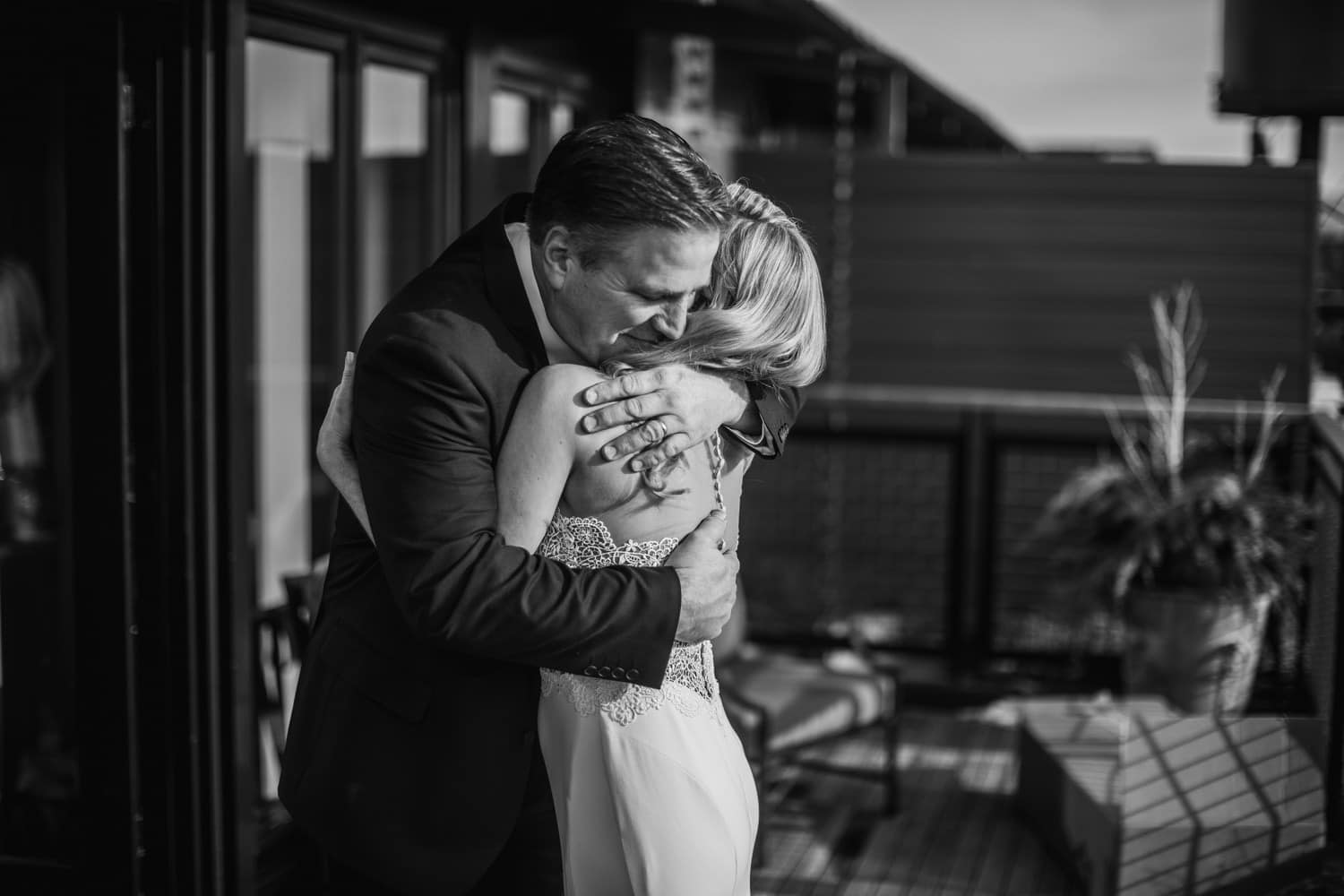 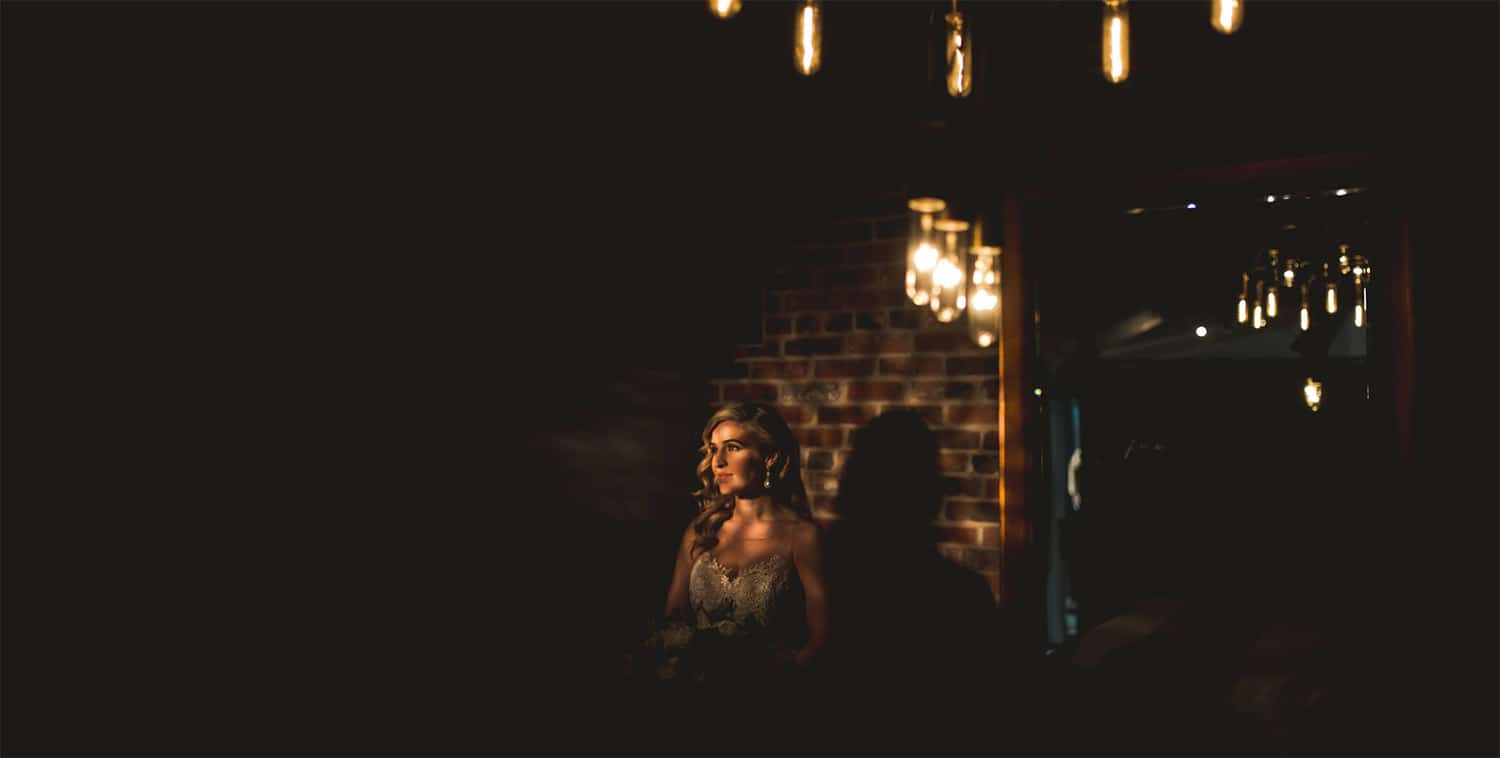 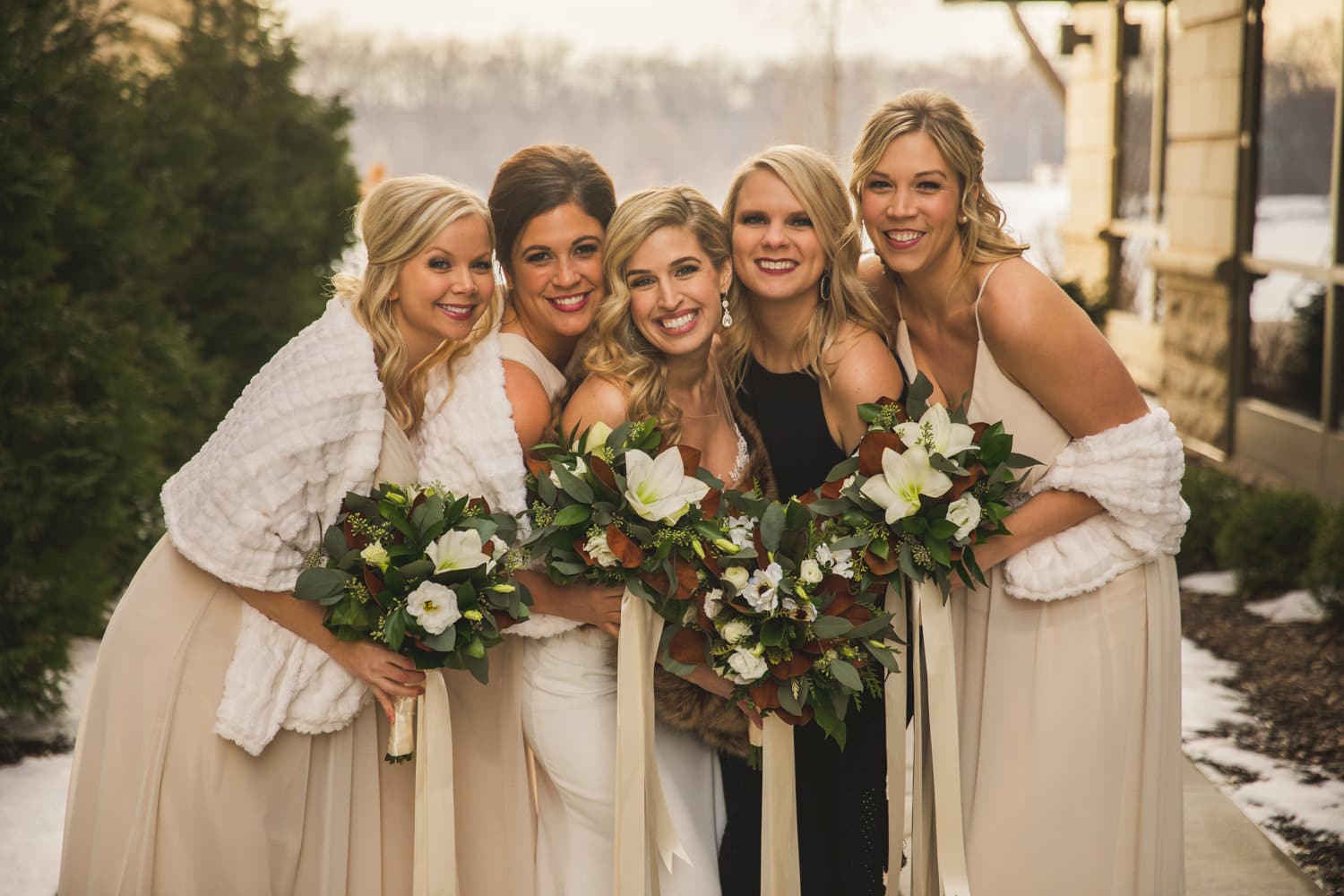 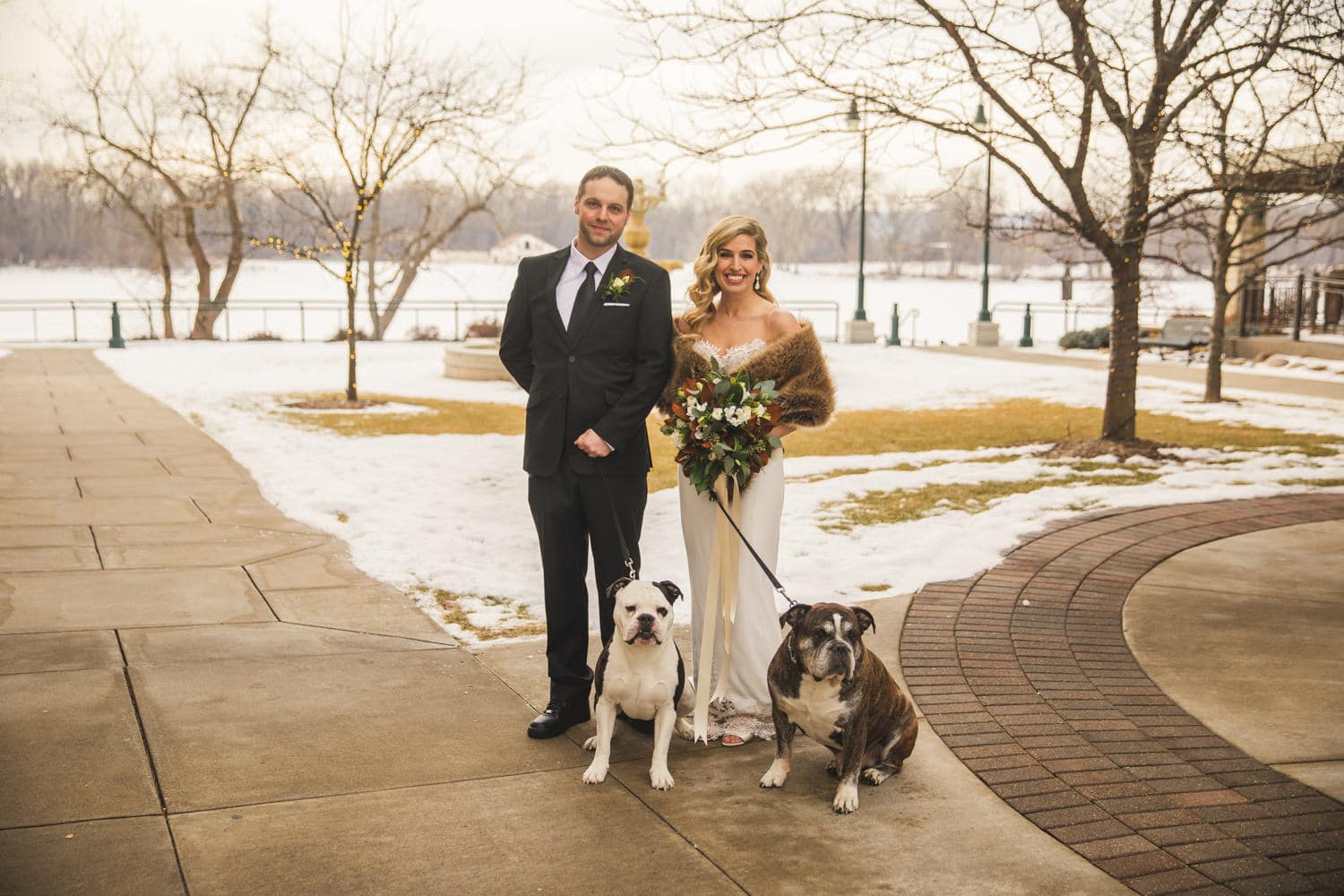 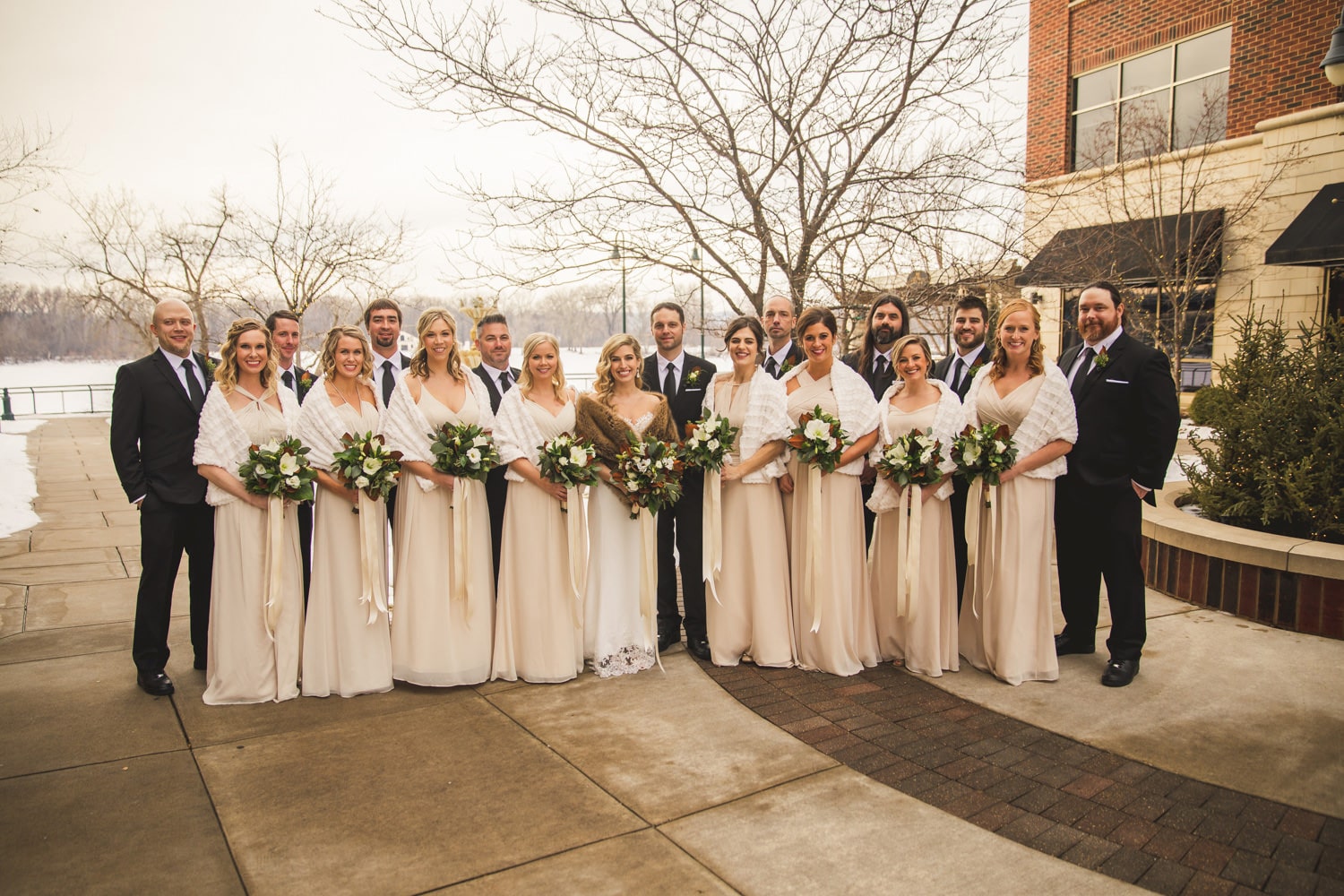 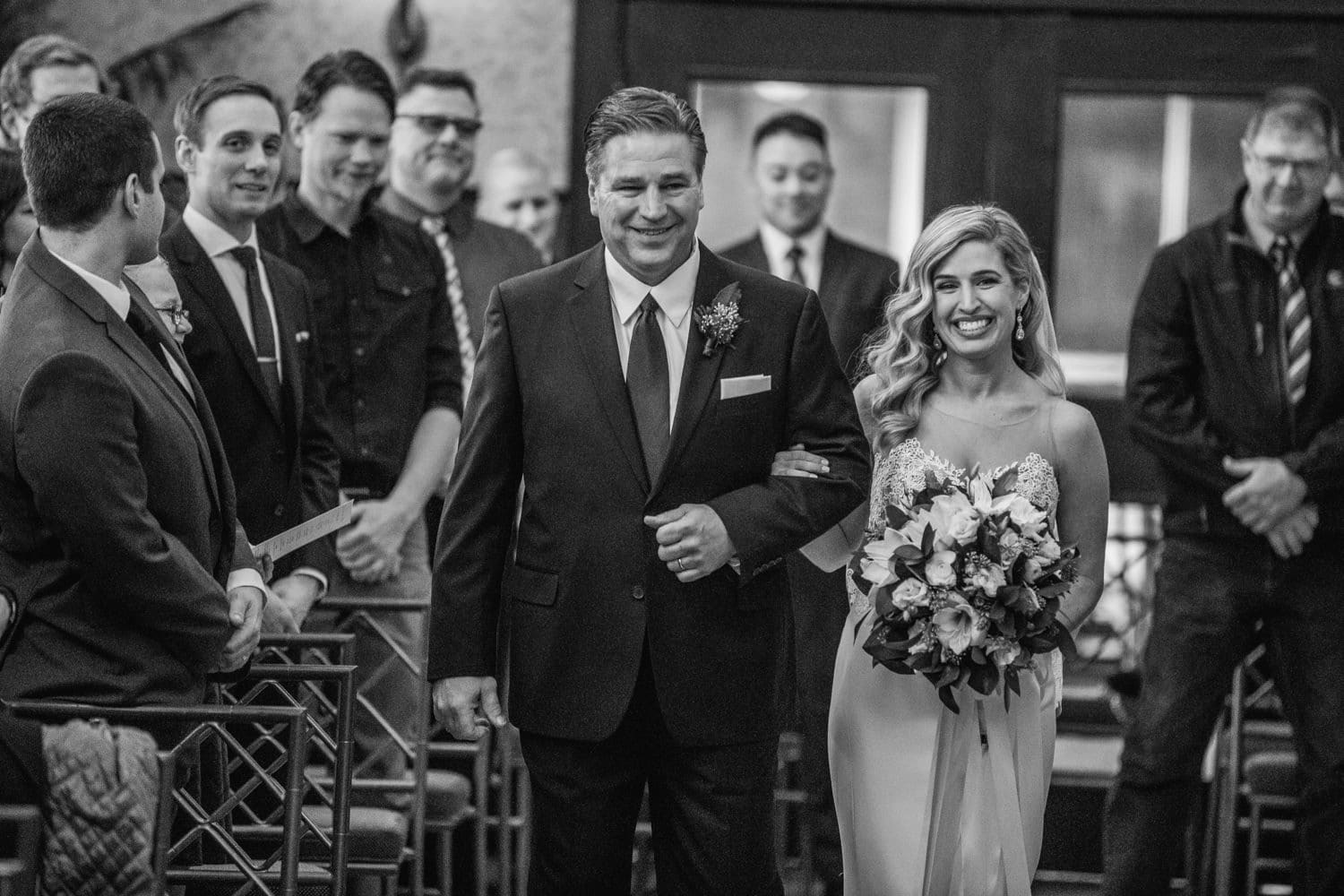 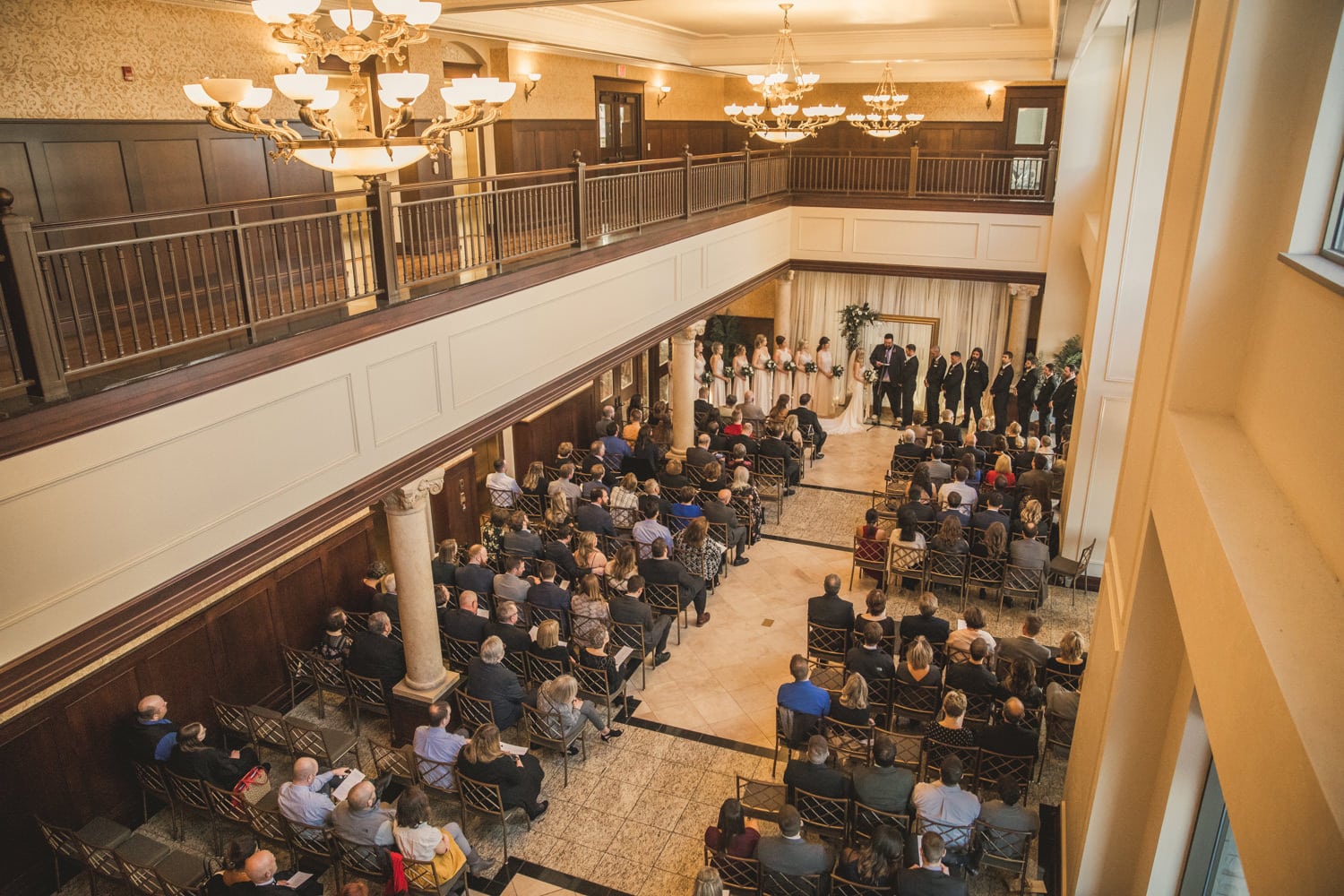 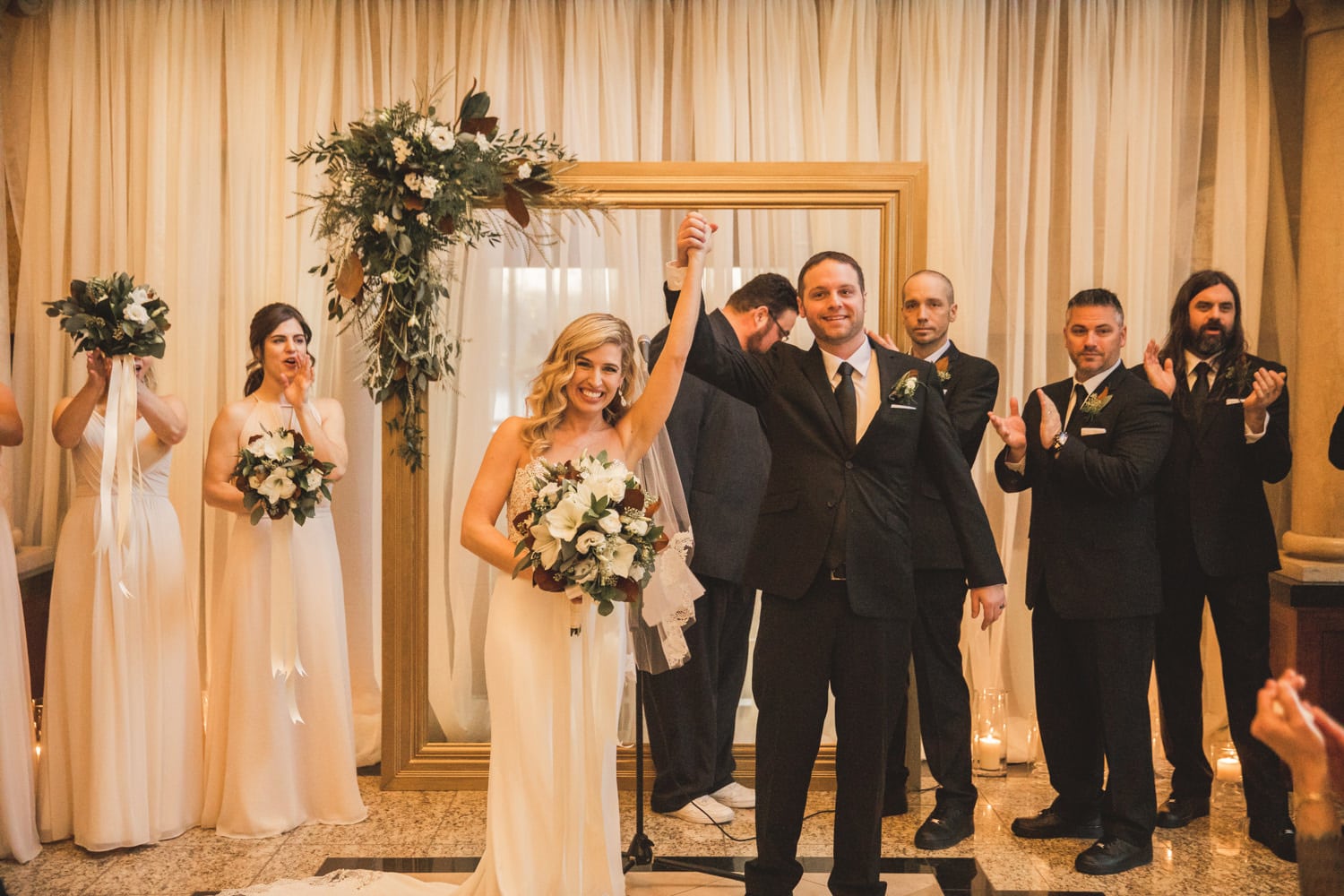 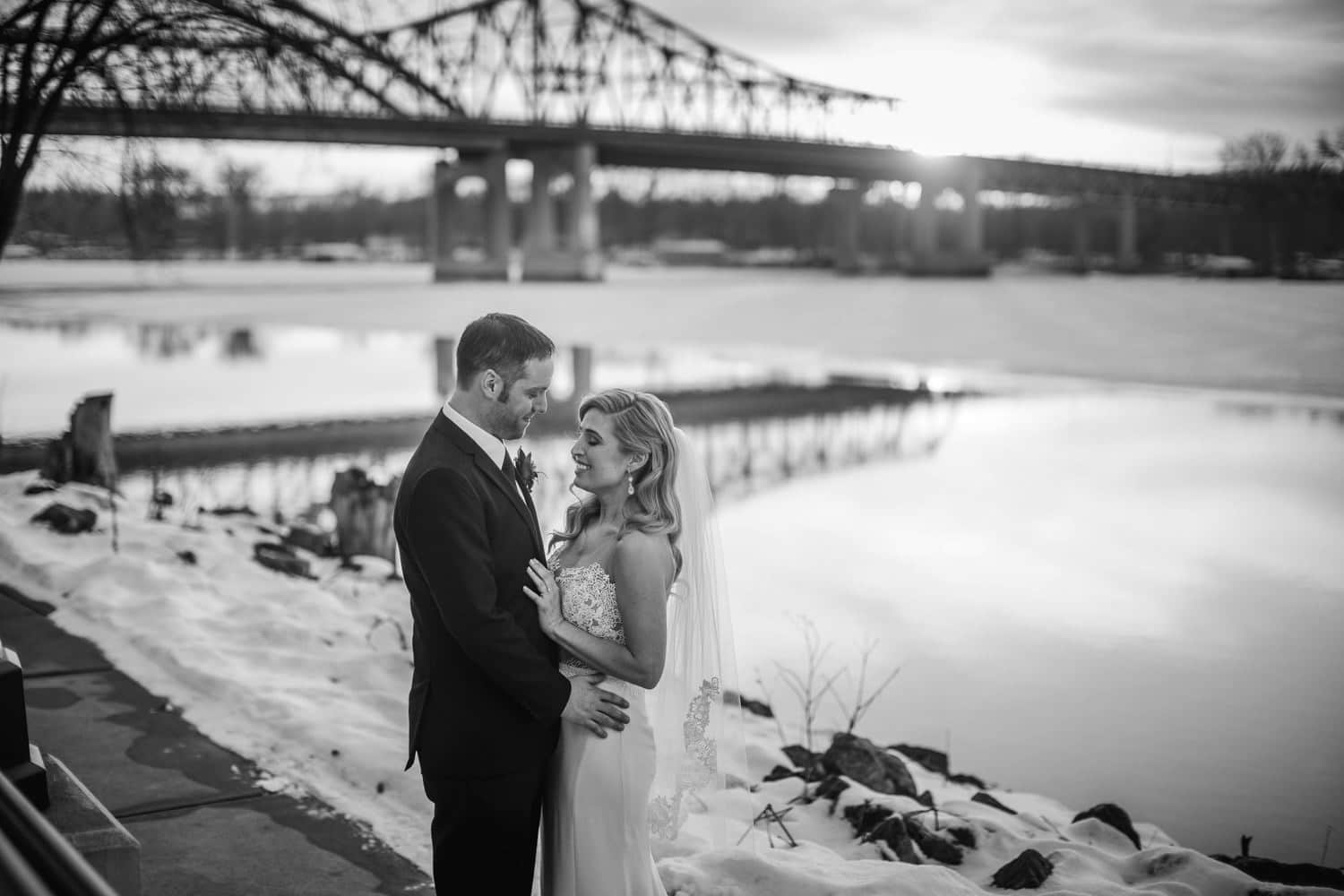 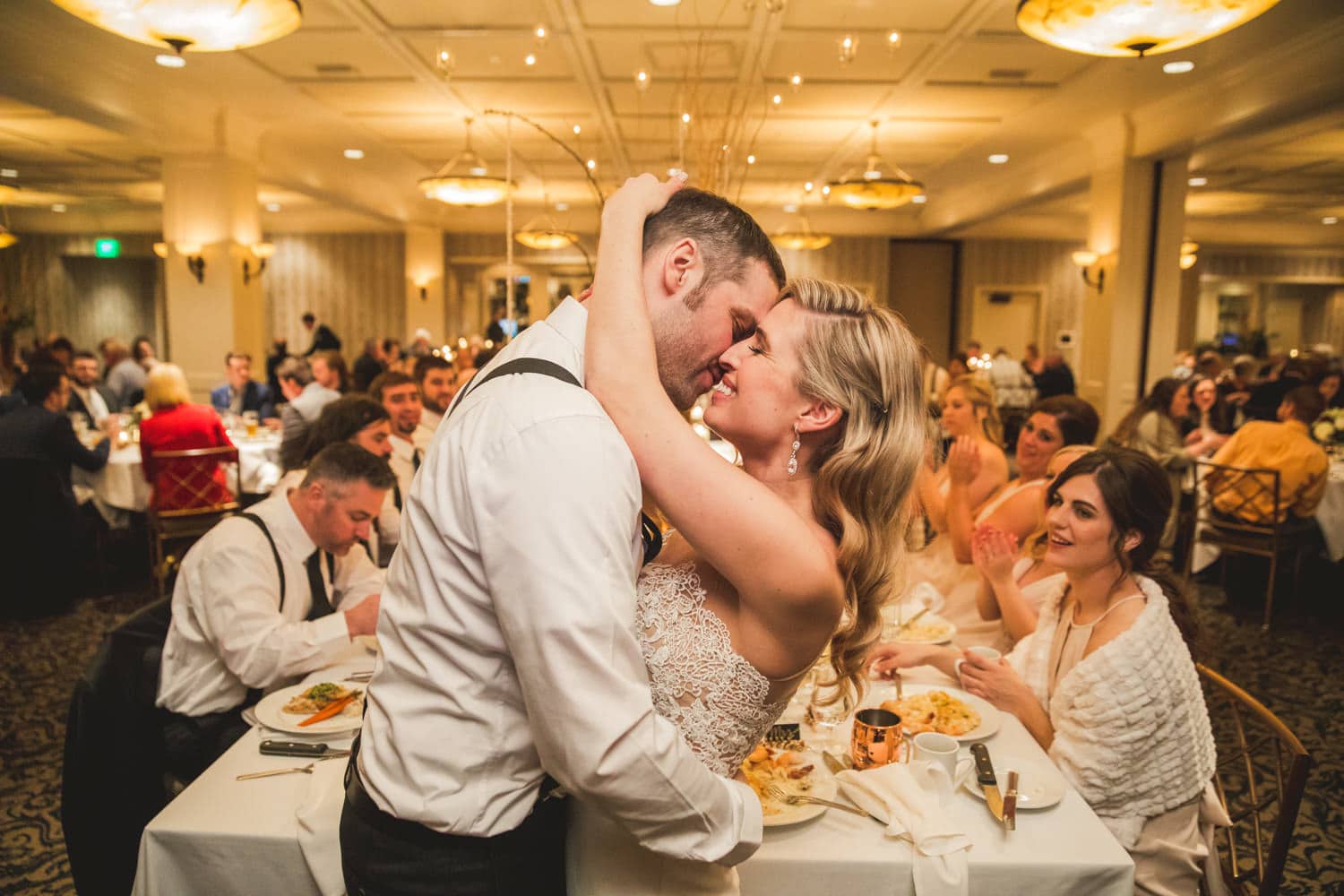 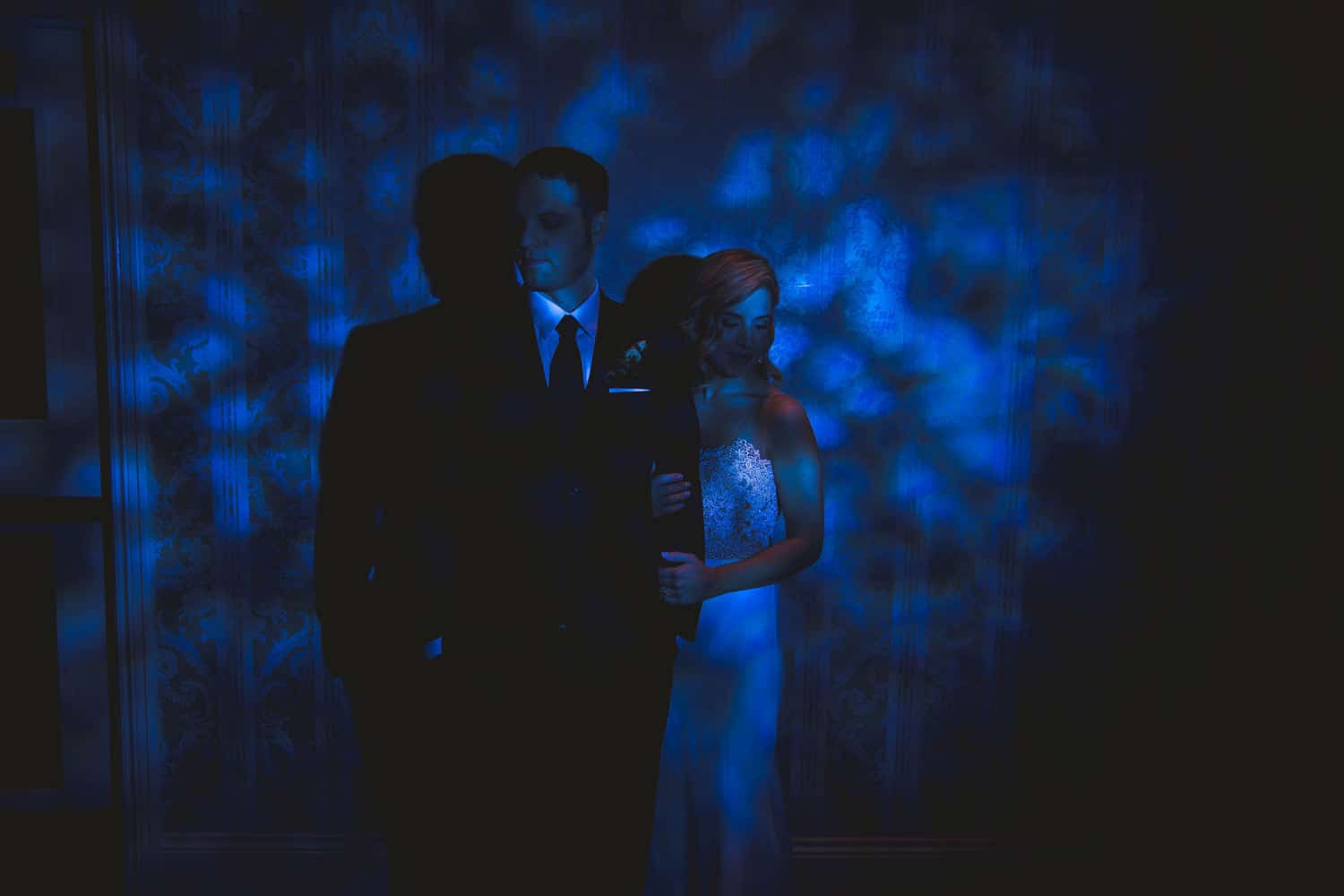 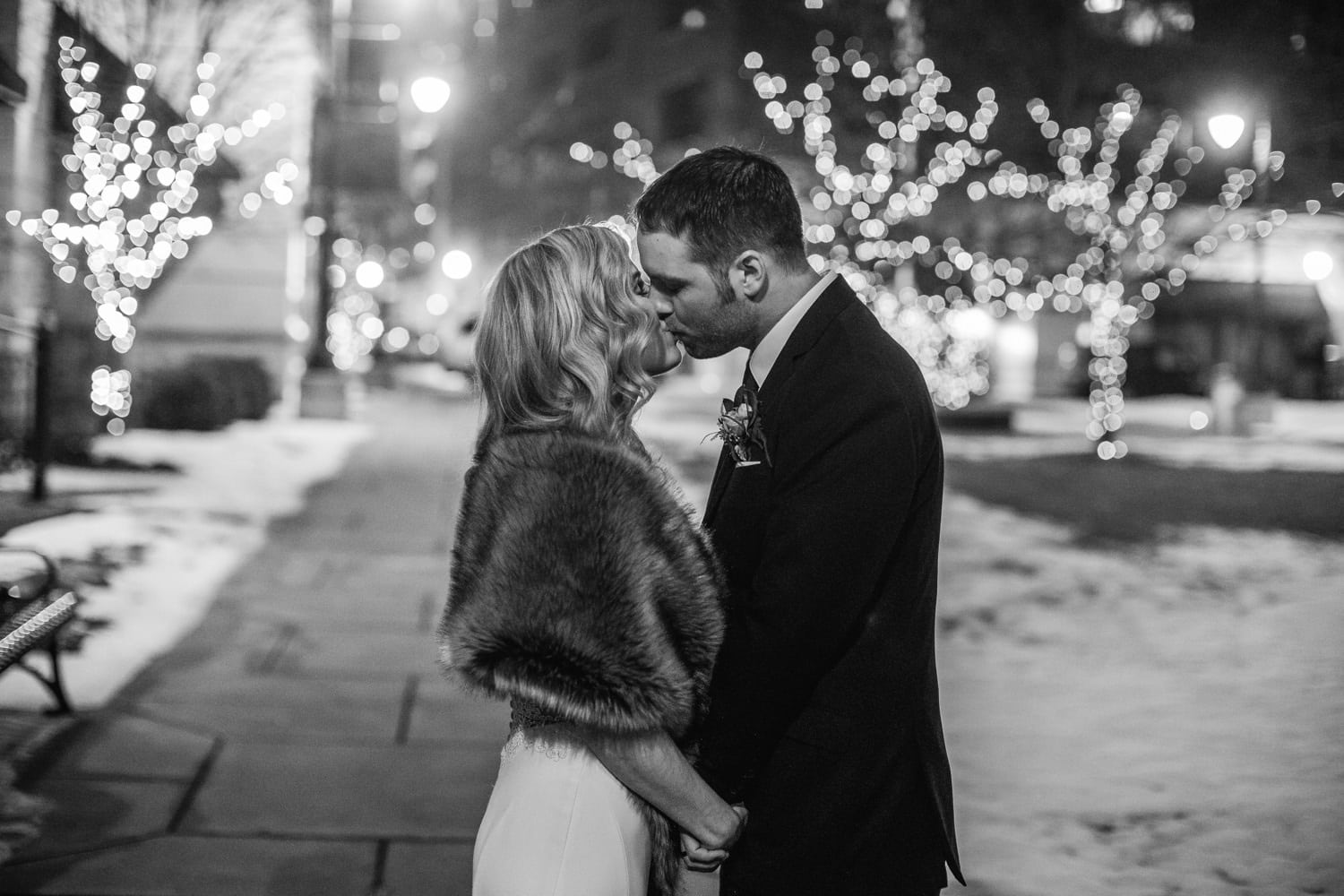 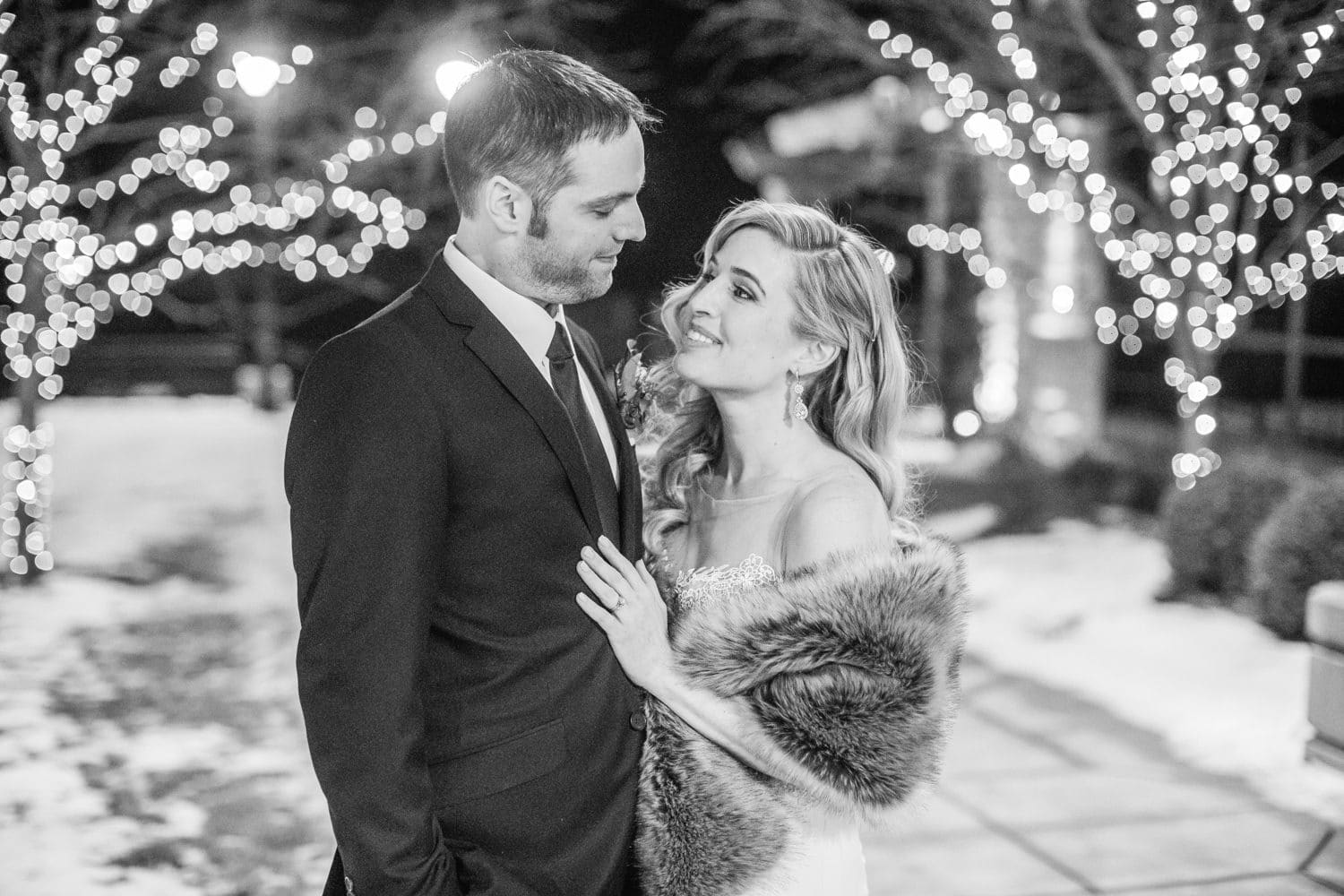 A few years ago, in a land very, very nearby (La Crosse, Wisconsin to be exact), a beautiful single gal laid eyes on a handsome bachelor enjoying a few libations at Chuck’s Bar. They didn’t know it in that moment, but fast forward and the two of them would be kissing in front of that same bar, shortly after becoming husband and wife on a brisk January day.

Hours earlier on this chilly day, Caitlin and her bridesmaids prepared for her big day in a stunning suite at The Charmant boutique hotel, located in downtown La Crosse, Wisconsin. While her bridesmaids wore matching black kimono-style robes with bright floral print, Caitlin stood out in a similar style robe, but in a white variation. The only member not donning a robe was Lefty, Caitlin’s beloved bulldog. (Insert) I think Dog Weddings knock it out of the park. I havent had a wedding with dogs that was bad. (exit Ben) The group of gals sat pretty on the bed of the suite, as I repeatedly and energetically chanted, “Do you wanna…?” to get him to look into the camera.  (The couple has another four-legged companion named Mo, pictured down above!)

Caitlin’s mother and sister assisted her in getting buttoned into her elegant white gown, with a delicate lace-detailed top, and a skin-tone mesh material around the collar that made the dress seem to float effortlessly on her. The bridal party cleared the room and the bride awaited her first look with her father on the deck of the suite.

As we re-hid the bride, Michael made his way up to the suite to see a first glimpse of his soon-to-be bride. Caitlin’s mother and bridesmaids looked on from the windows, a few of them with tears in their eyes.

The bridal party braved the cold for some pre-ceremony formal photos near the icy Mississippi River. Caitlin and her bridesmaids all wore shawls to keep themselves warm, in addition to tan mittens with a large white heart knit into the design, made by the bride’s grandmother for the occasion. The bridal party kept their energy up despite the temperatures outside, beaming with smiles and laughter in anticipation of their two friends about to be wed!

The ceremony, which took place in the lobby of the Cargill Room in downtown La Crosse, Wisconsin, was ordained by the couple’s friend. They chose a unique alternative to a traditional awning – a large gold picture frame stood behind the couple, adorned in the upper corner with a floral arrangement, flowing with lush greenery. Caitlin and Michael exchanged vows and happily said “I do” in front of their friends and family.

Post-ceremony, the newlyweds took a few photos down by the Mississippi River as the sun set, before hopping onto the limo bus headed to where it all began…Chuck’s Bar! The wedding party and Mr. & Mrs. Ellenz enjoyed a few drinks in between the ceremony and reception, nibbling on the free popcorn and playing the various “bar games” available inside.

The crew headed back to the Cargill Room in downtown La Crosse, where friends and family were already getting the party started. Plenty of glasses were clinked and kisses exchanged, and an audible “Oh Dear Lord” came from someone in the bridal party when the Father of the Bride continued on with his (several paged) speech about the joys of being Caitlin’s father, eliciting laughter from the crowd. Her father shared with everyone his daughter’s kindness, and even provided an example – bringing out a note Caitlin had left him one time when she was younger.

The “first dances” commenced, and live music by TUGG- a Midwest favorite reggae-rock band – drew everyone out onto the dance floor!

Congratulations Michael and Caitlin Ellenz (and Mo and Lefty Ellenz)!