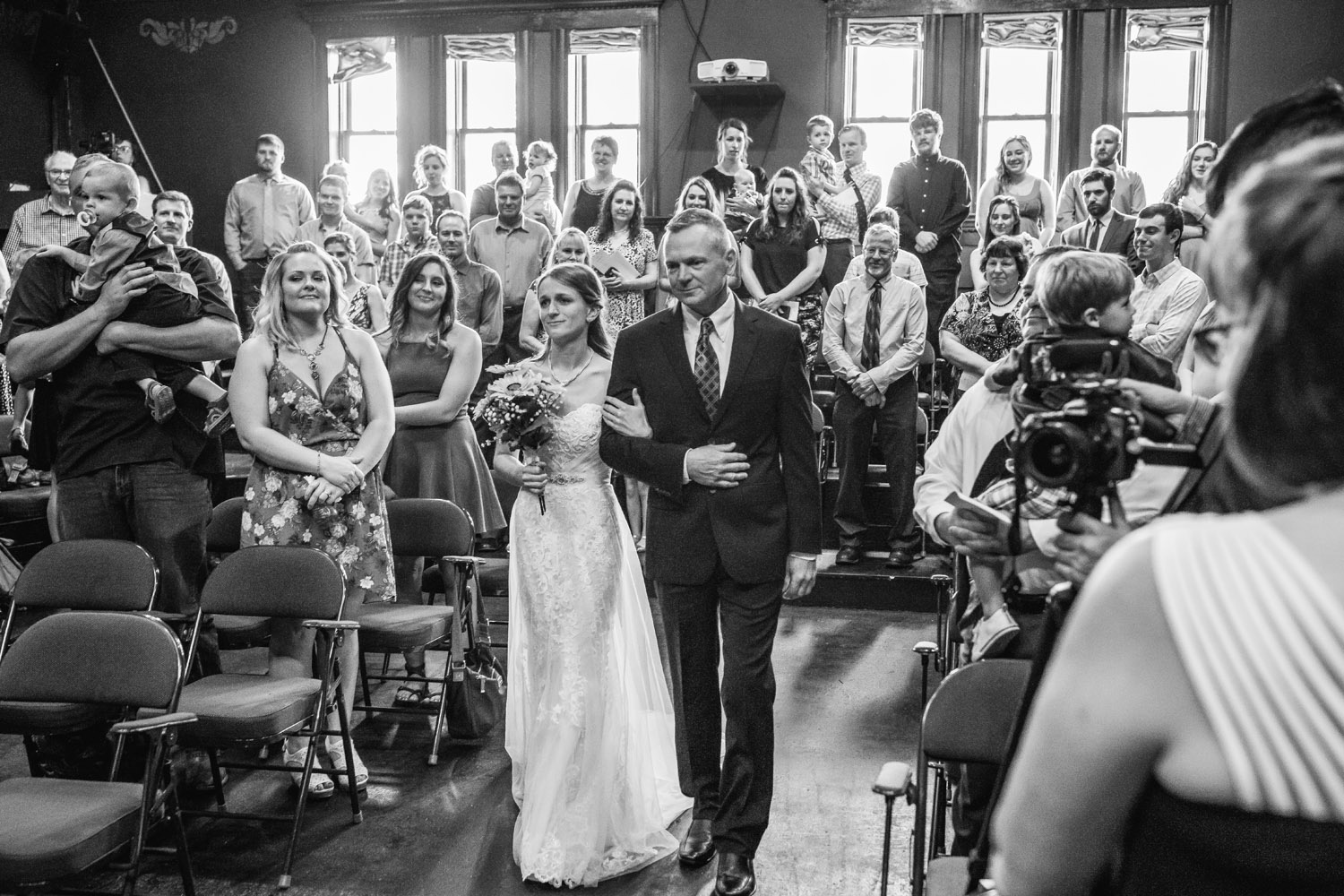 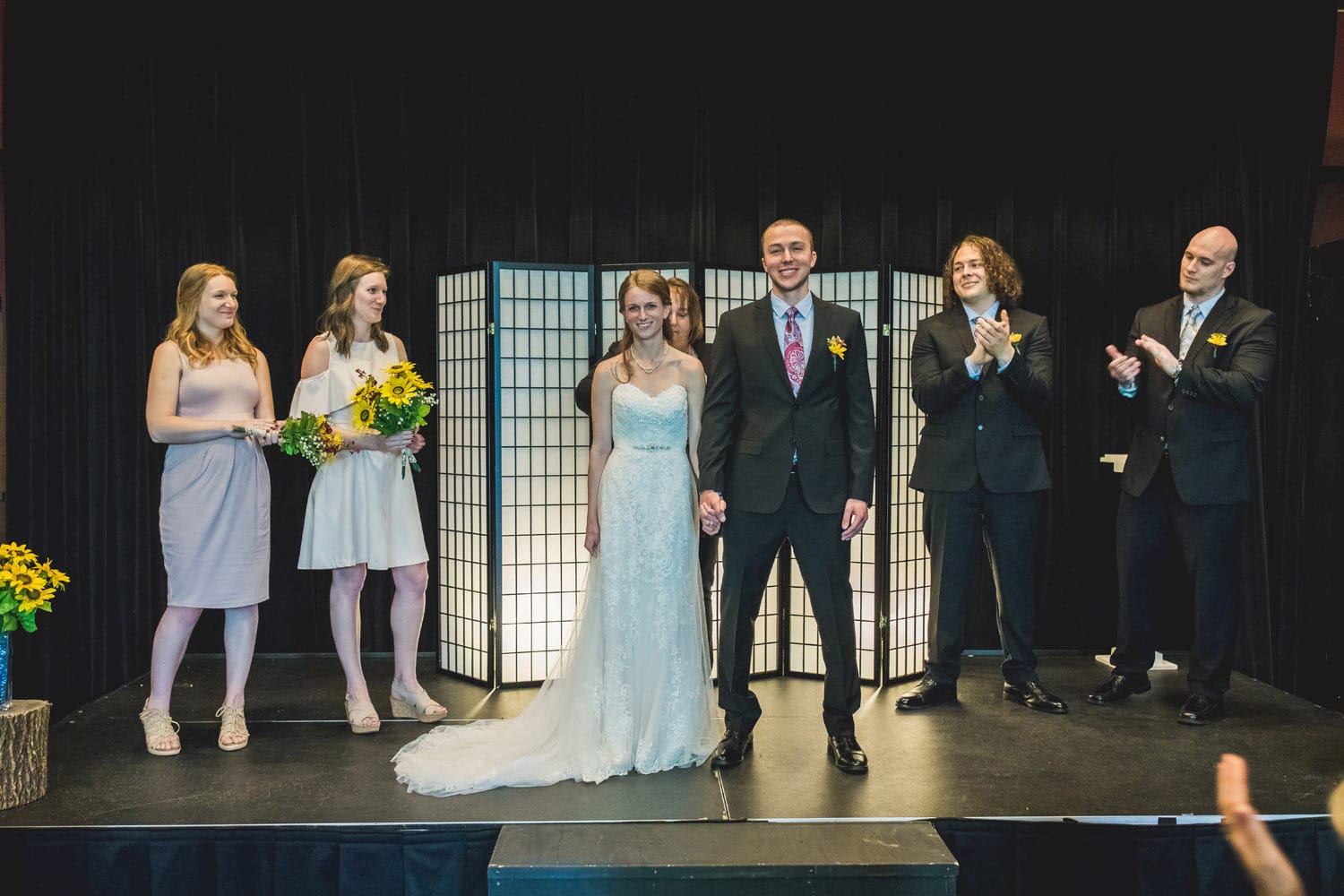 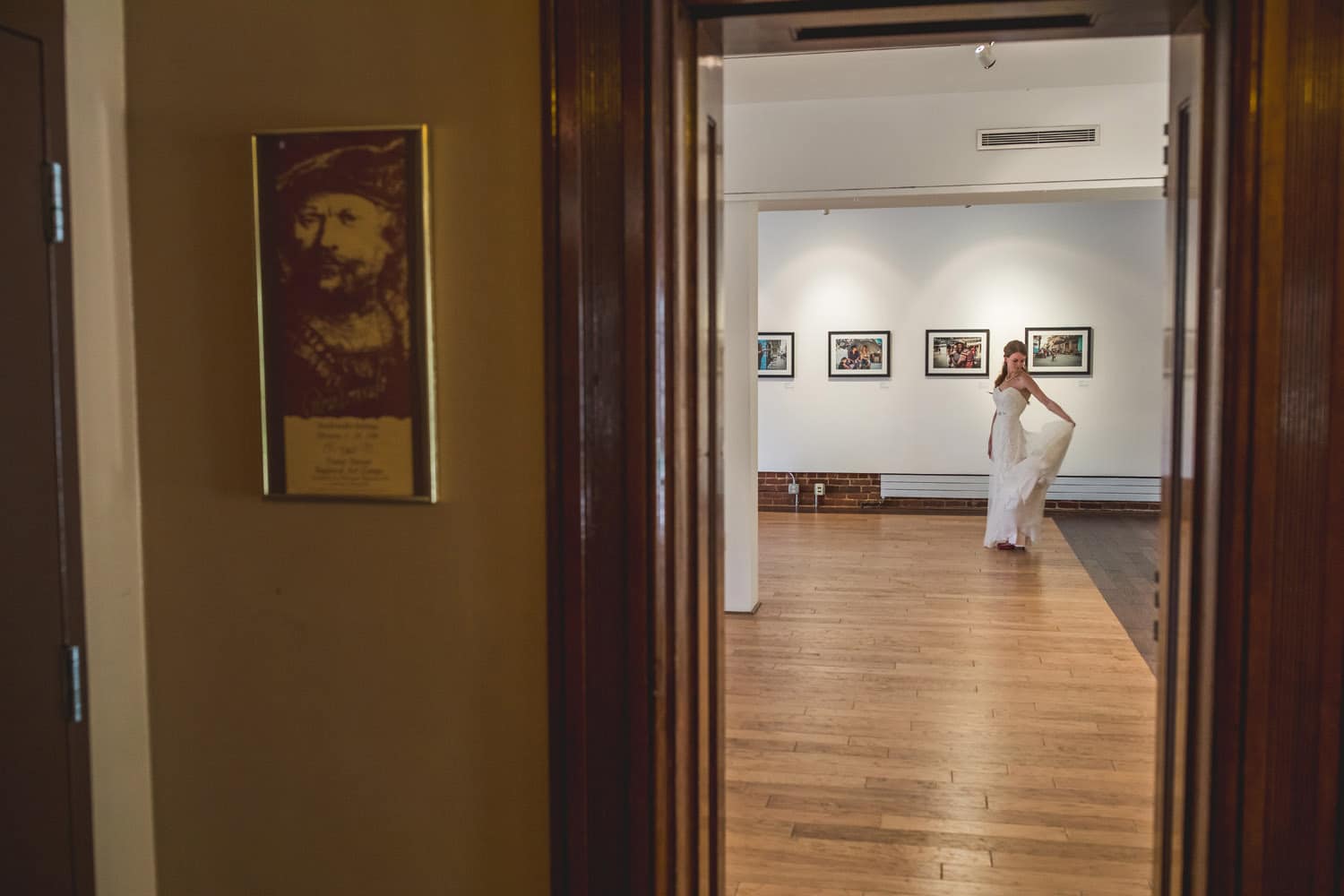 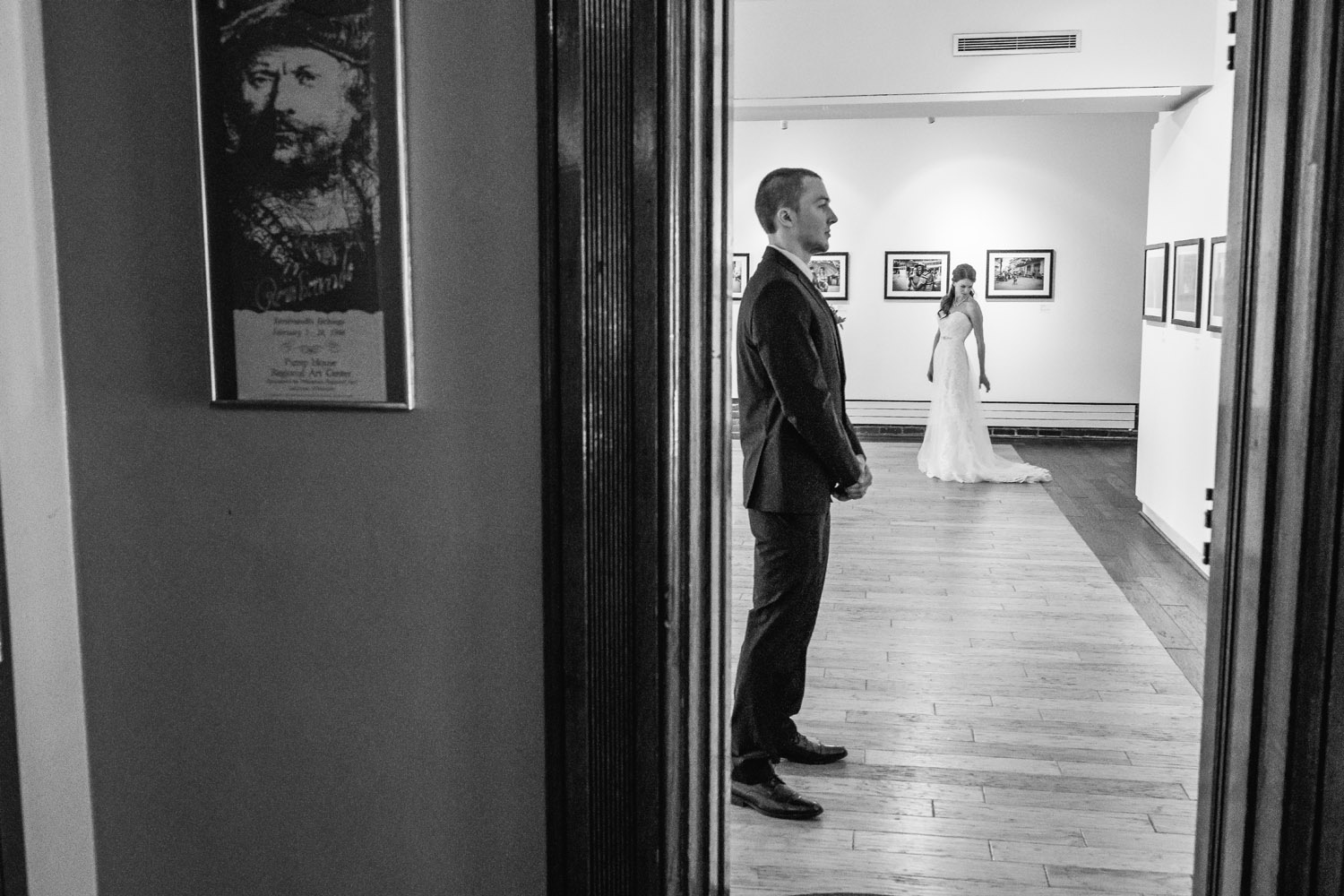 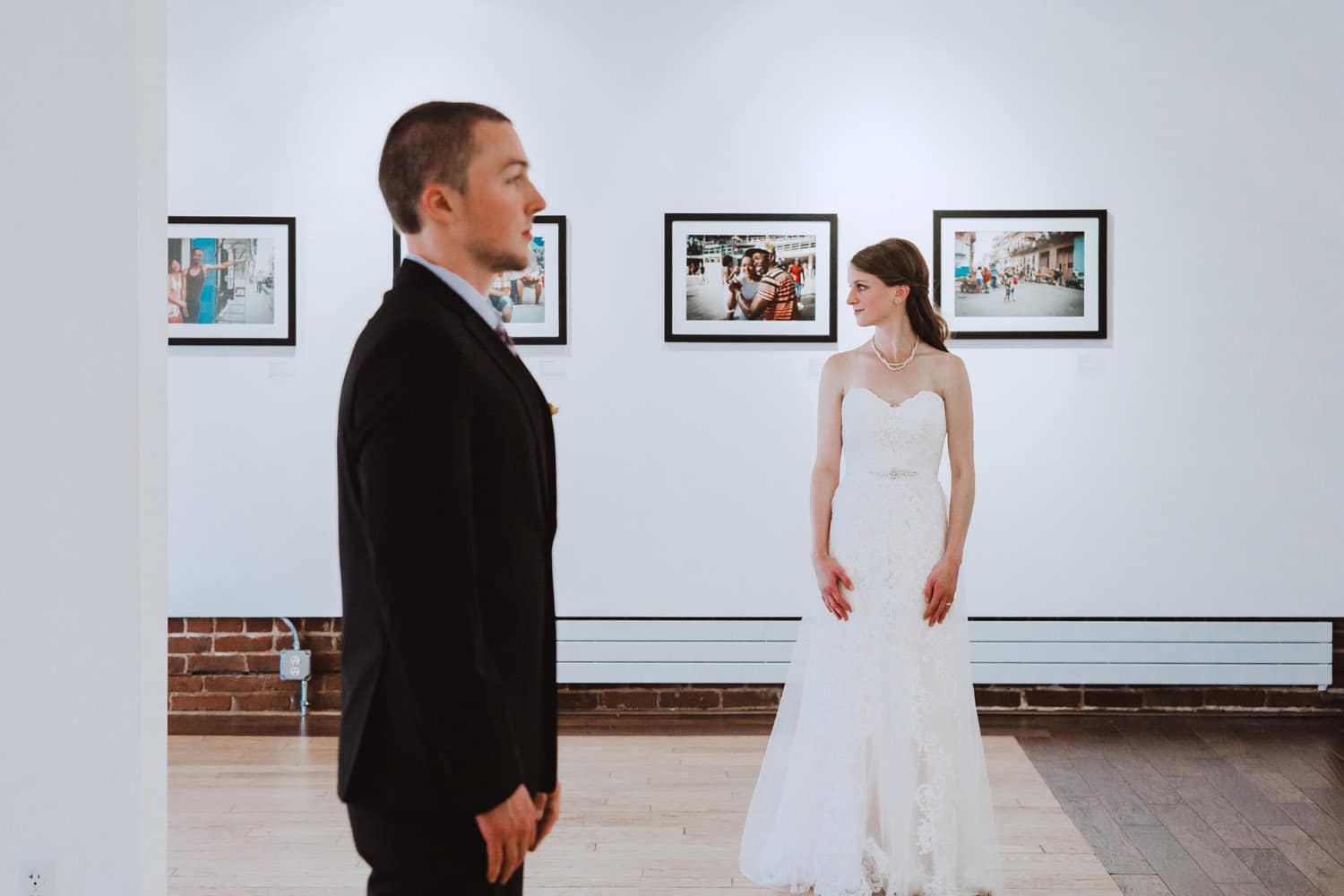 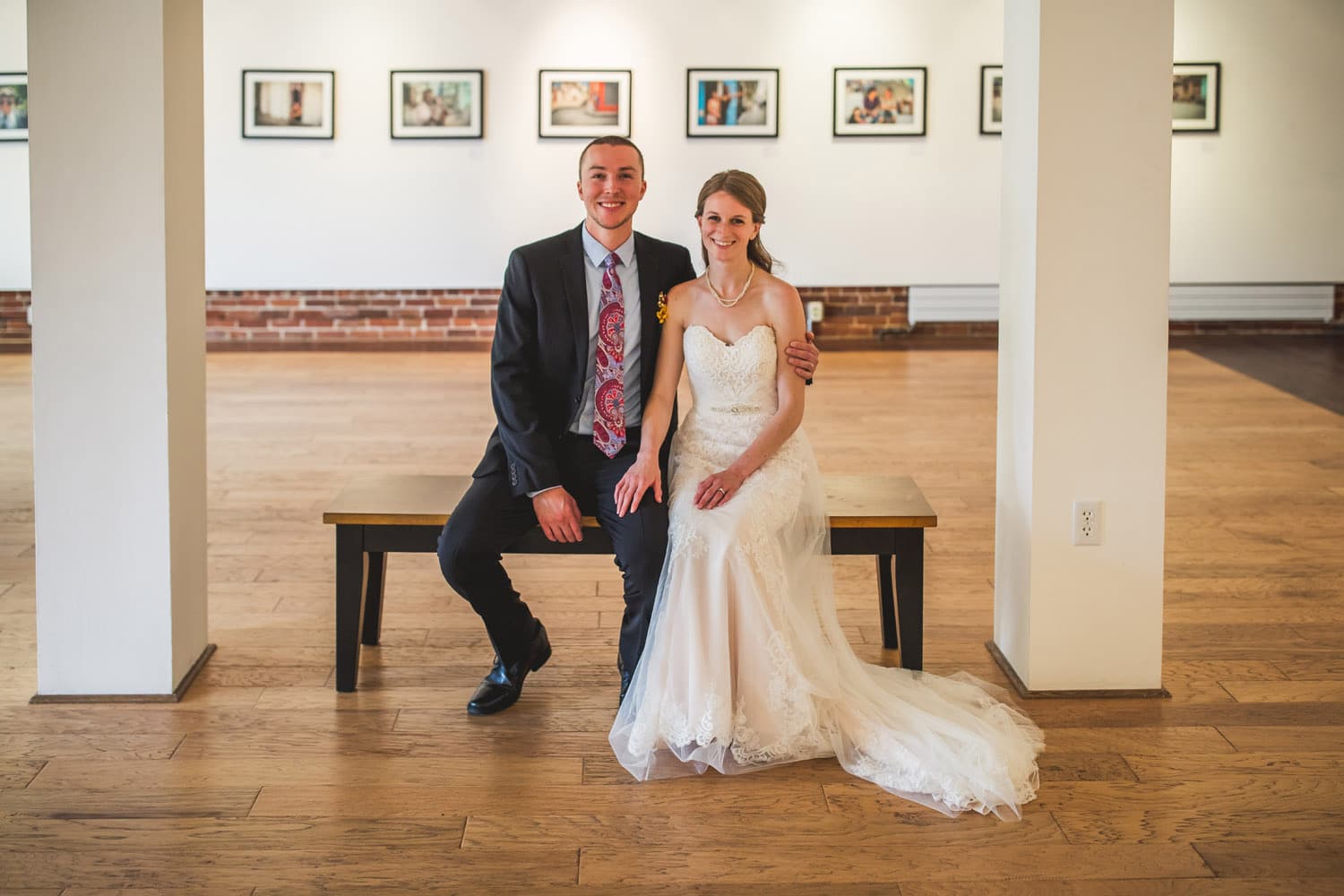 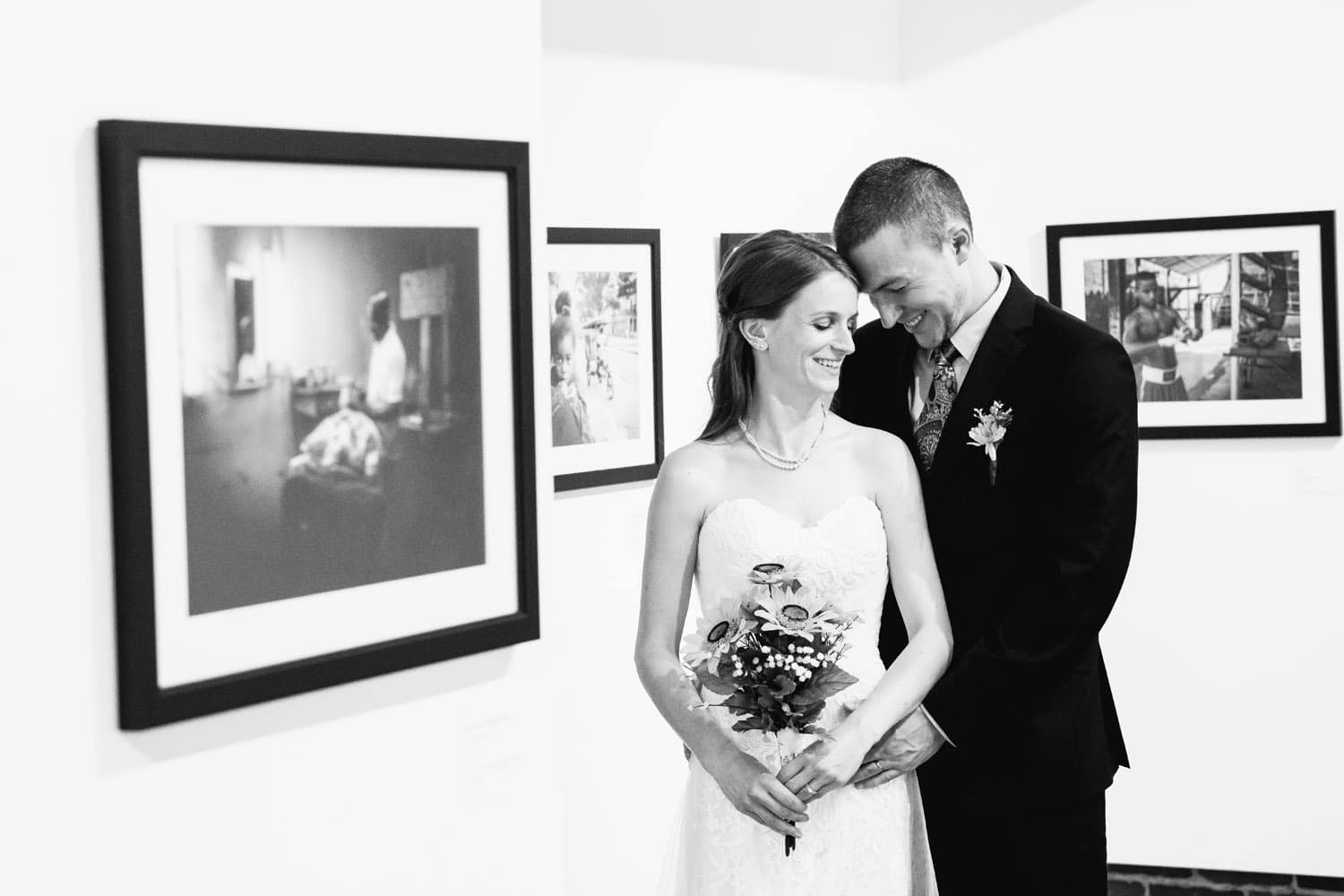 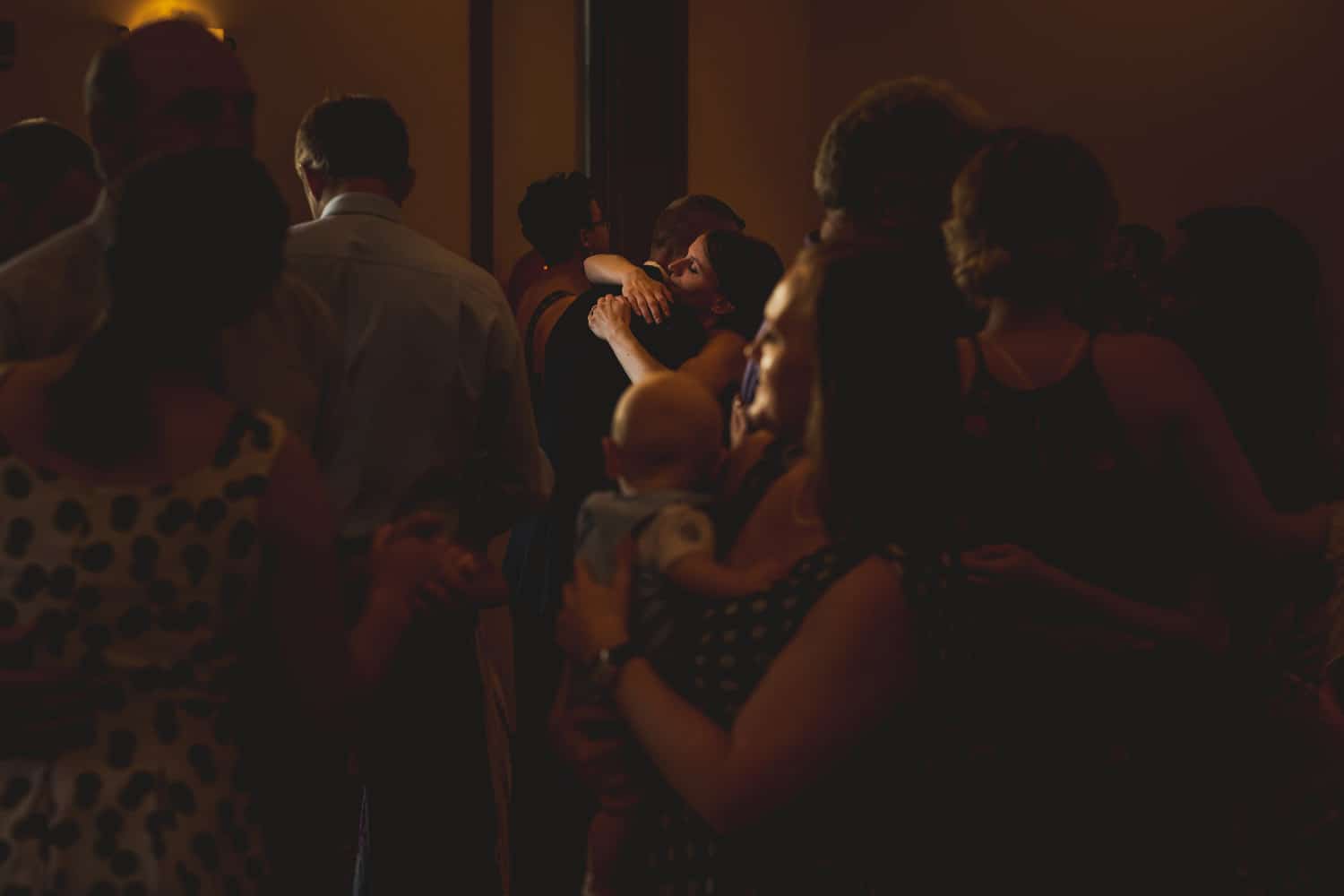 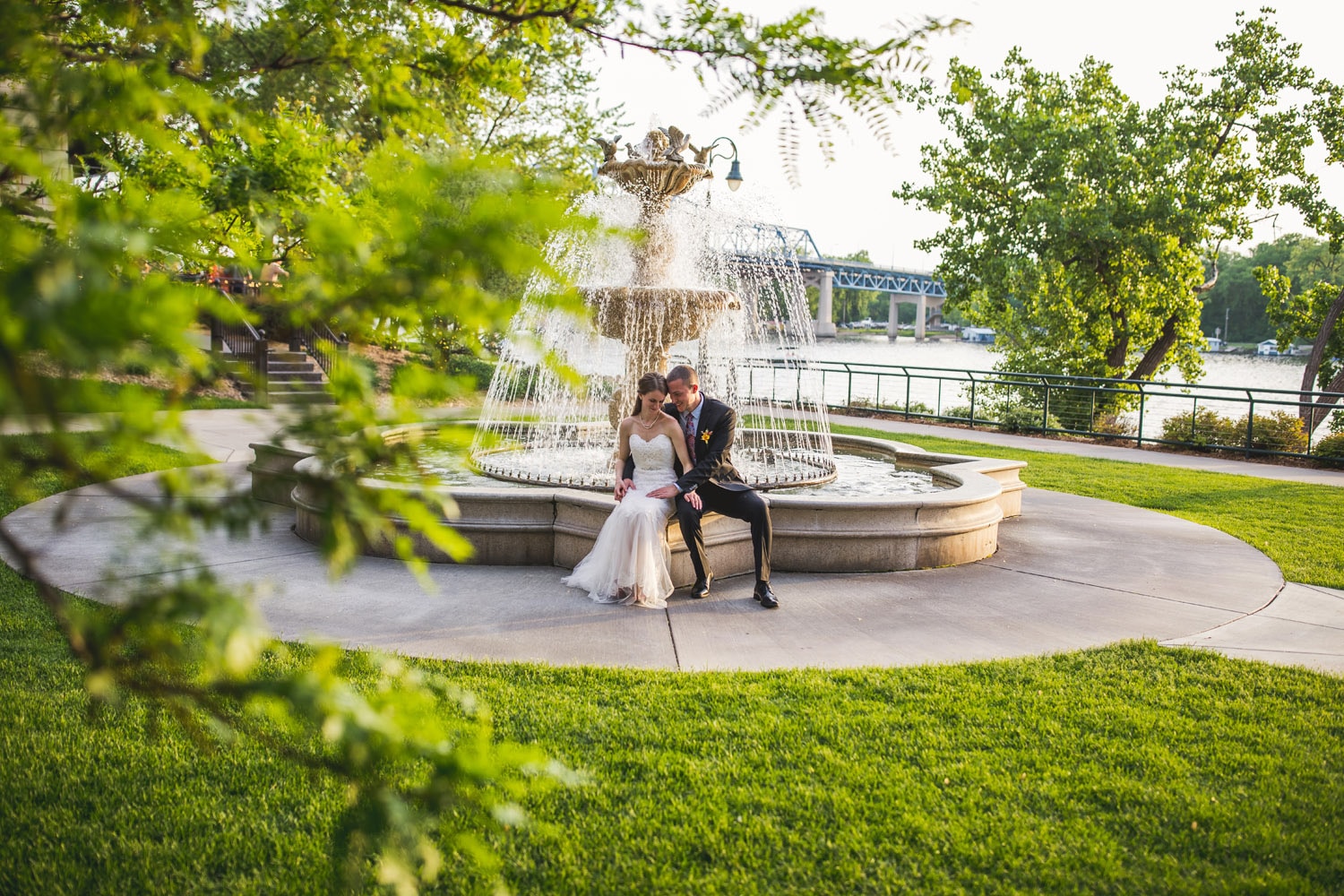 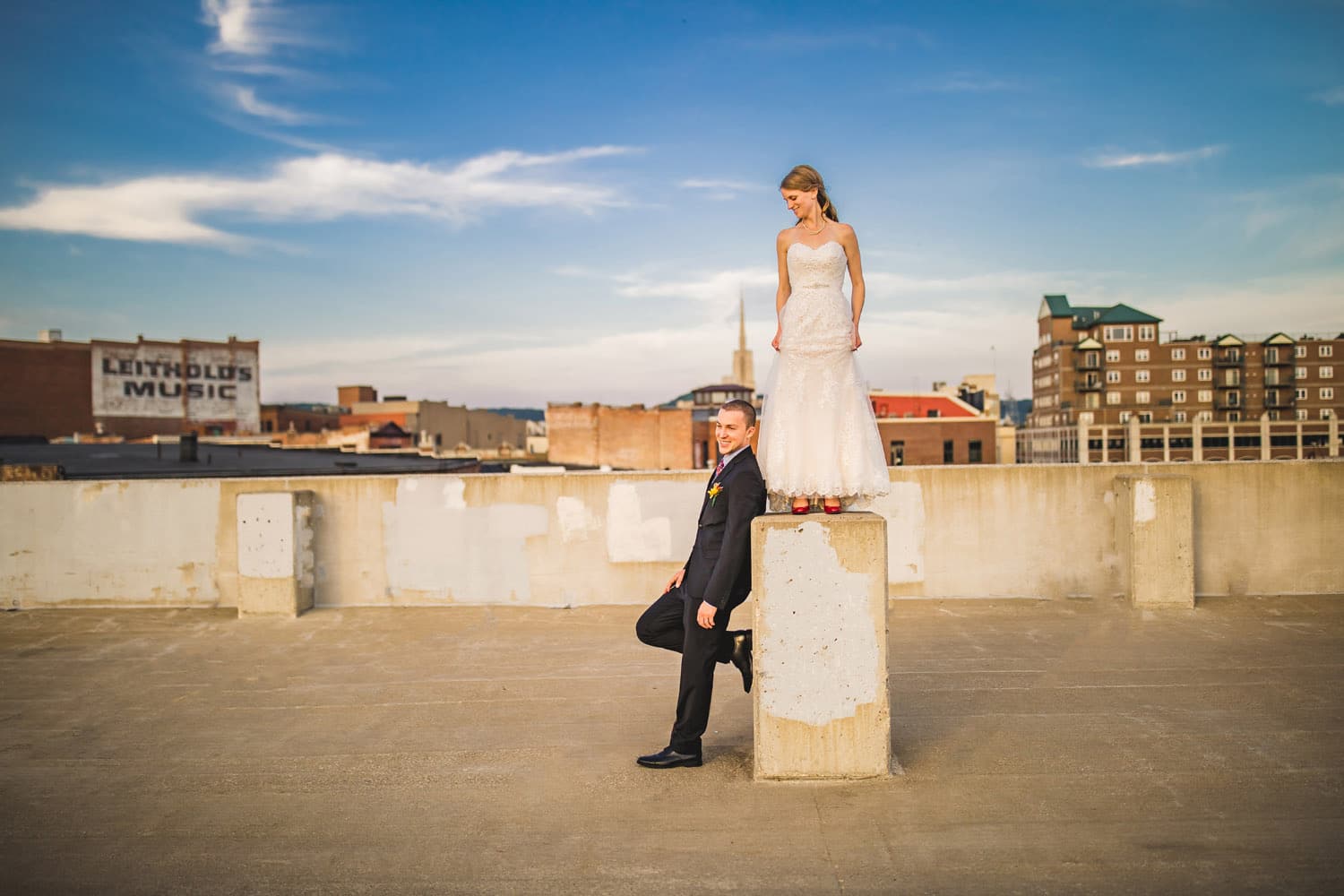 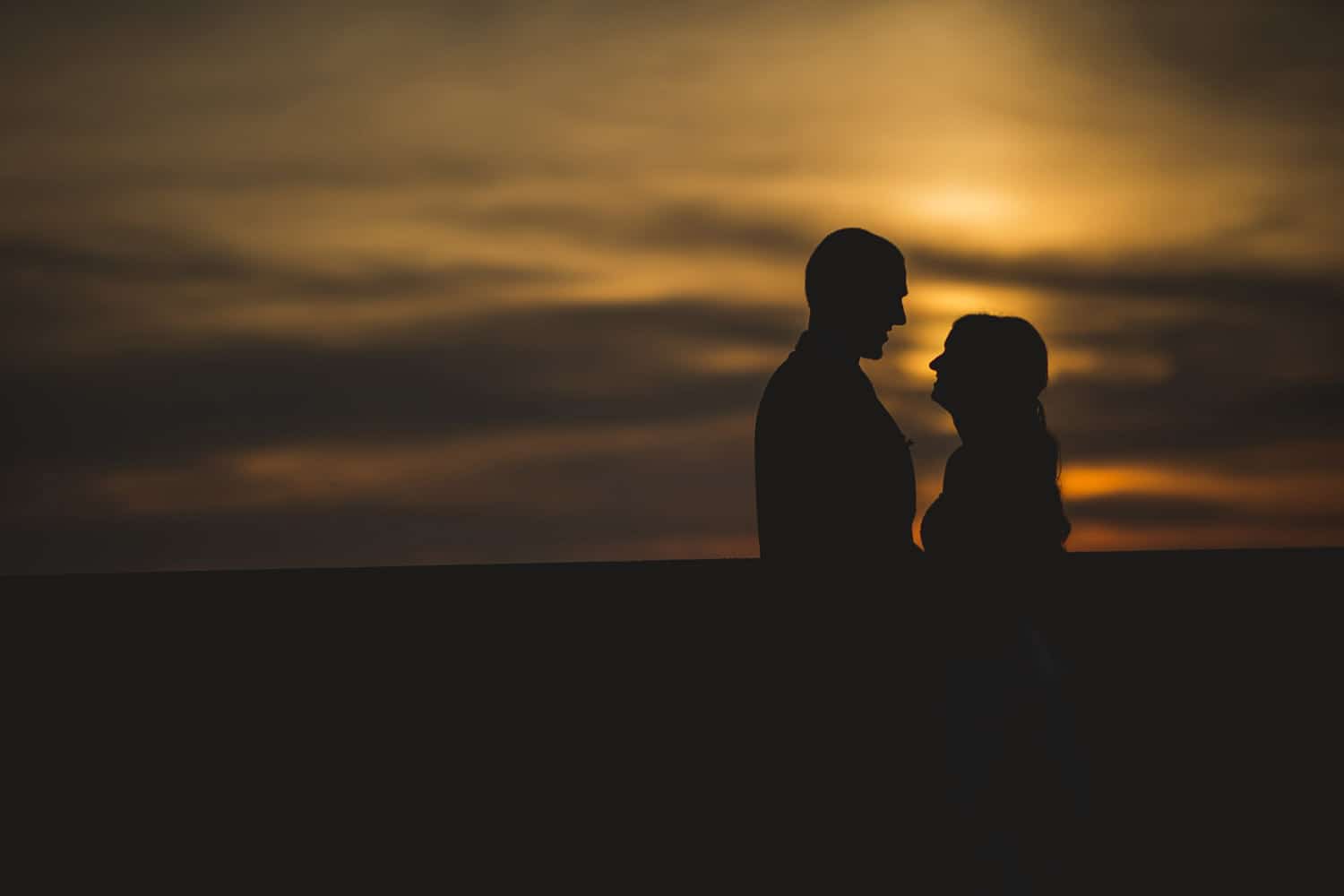 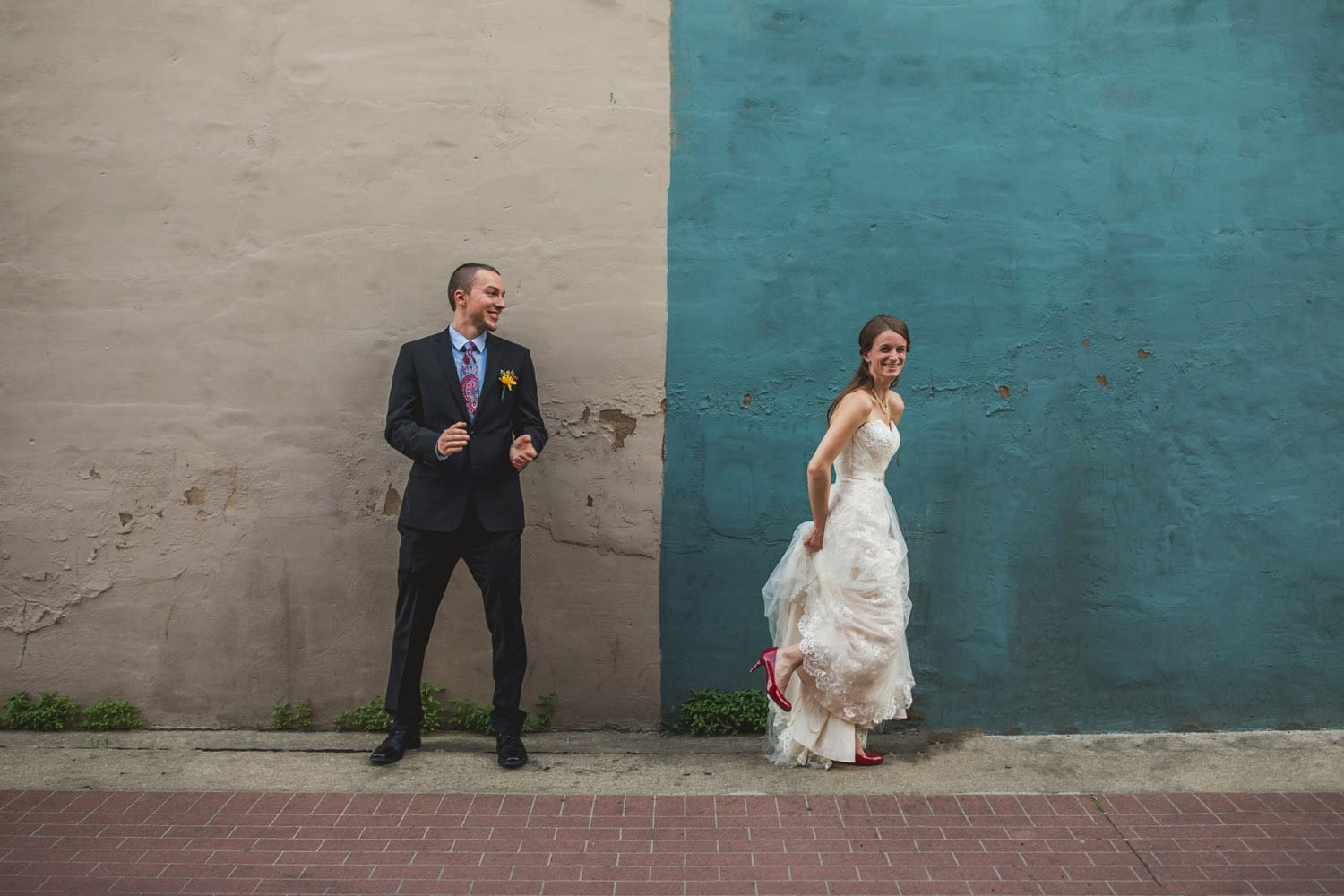 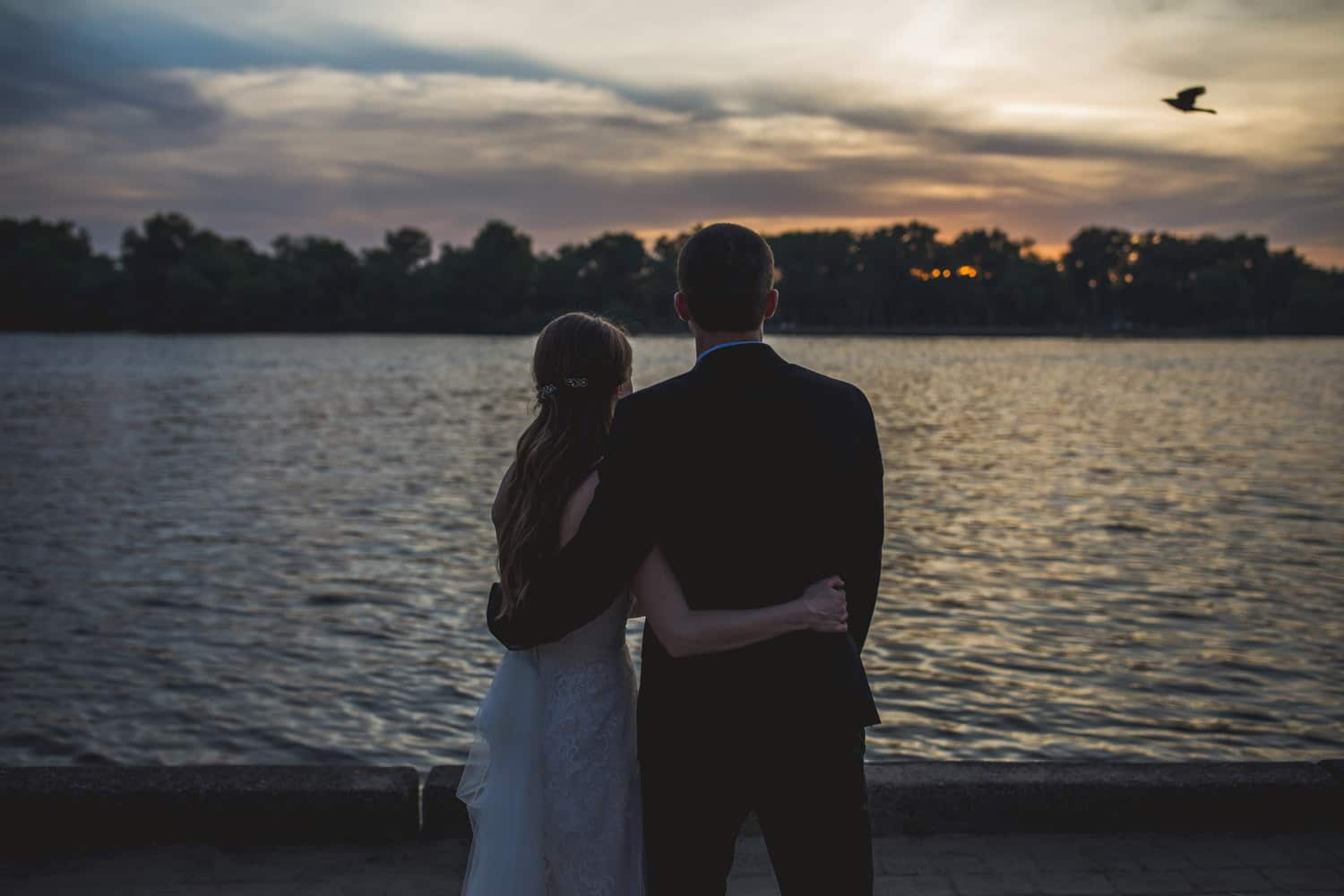 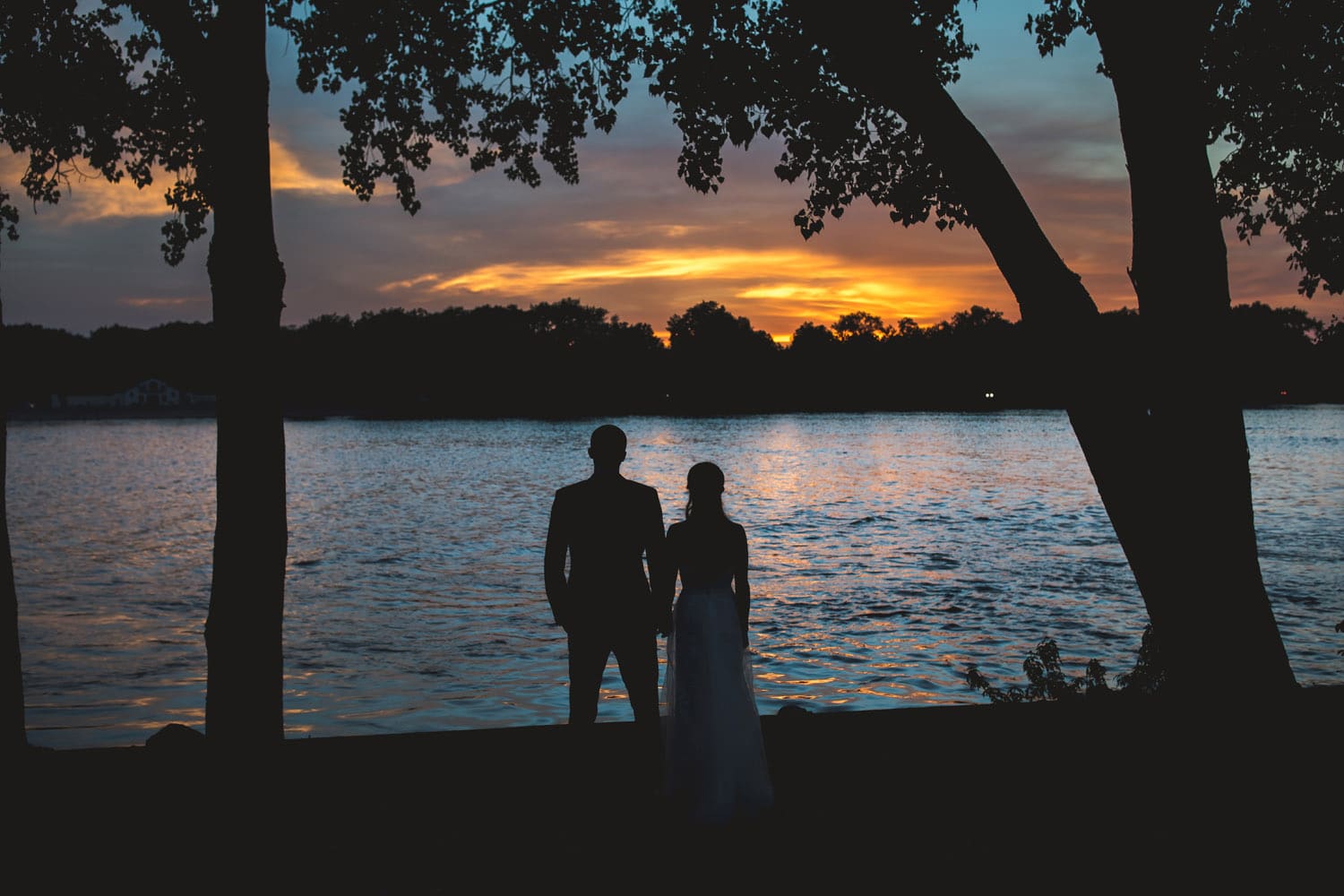 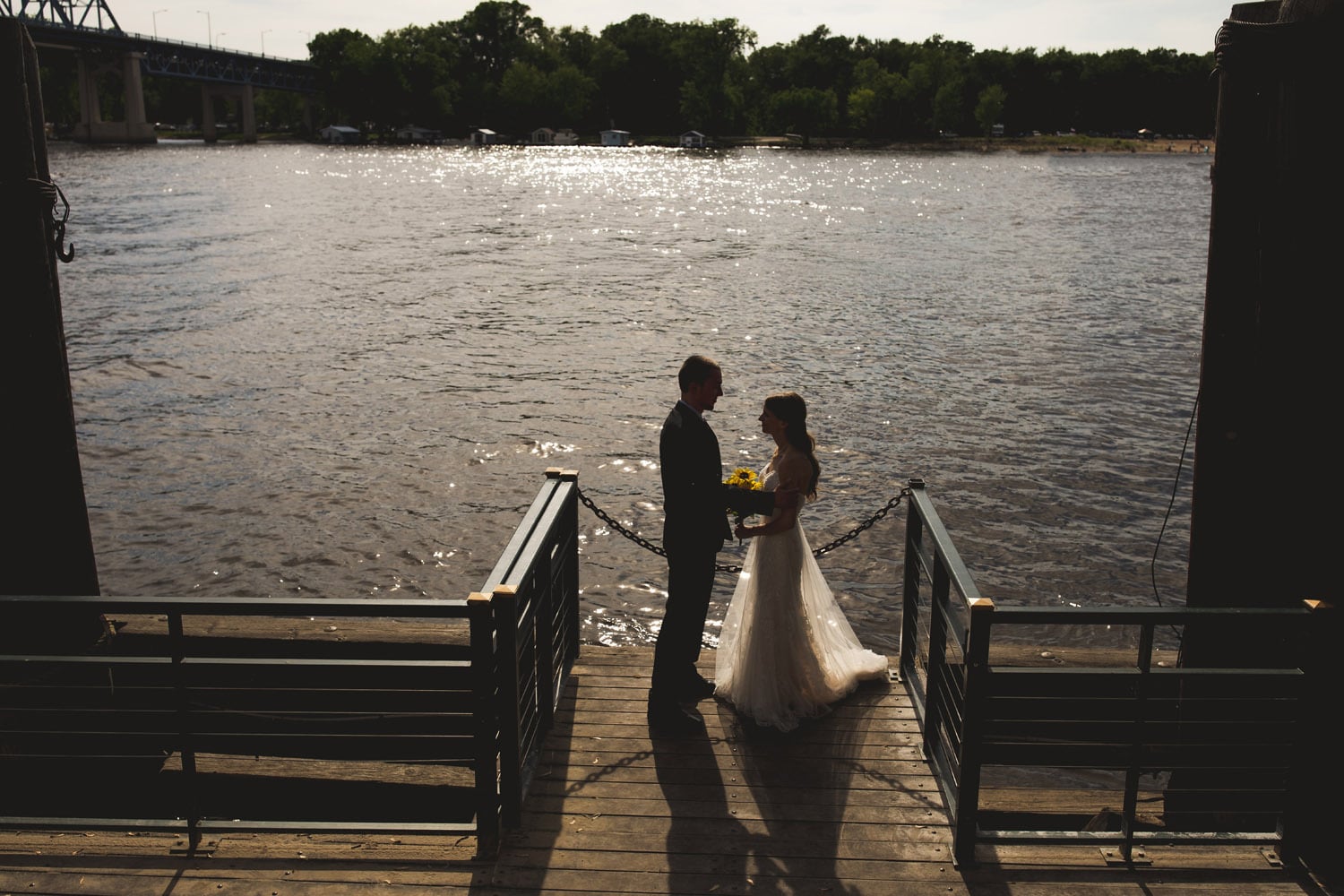 Pump House Wedding
“You Lift Me Up”

This Pump house wedding started on the river, at Riverside Park. Stefanie’s father was not told ahead of time he’d be getting a first glimpse of his daughter in her wedding dress before she and Shawn tied the knot. It was a humid day in downtown La Crosse, Wisconsin and as he posed for photographs near the Mississippi River, Stefanie approached from behind, grinning from ear to ear, and gently tapped him on his back. His eyes widened as he turned and saw Stefani in her elegant strapless white lace gown, and tears filled his eyes as he gave her a heartfelt hug.

The pair was joined by Stefanie’s two sisters, who were her bridesmaids on her big day, and her mother and niece. The family took some formal photos together, before heading to the ceremony location about a block away, the Pump House Regional Arts Center in La Crosse, Wisconsin. Once the bride was hidden, the groom and his family members and friends replaced them in the courtyard by the river to take pictures of their own before the ceremony took place.

Guests began arriving at the Pump House as a woman played piano for the crowd gathering in the “Witness Room”, and Stefani stayed tucked away in the art gallery downstairs. Once the groom and the rest of the bridal party and their families entered the ceremony room, the door was shut before Stefanie and her father made their way upstairs. What struck me the most about Shawn’s reaction to his bride was how proud he looked to be able to call this woman his wife in a matter of moments. When he laid eyes on her, he physically stood up taller, heart and chest open wide, and grinned with his mouth closed. It was a moment where you could truly sense the authenticity of their love.

Stefani and Shawn had a few more small surprises up their sleeves for their loved ones, inviting both of their mothers up to the altar to sign the couple’s marriage license during the ceremony. The two were pronounced husband and wife, shared their first kiss, then headed downstairs to take some artistic photographs in the art gallery. The two struggled to keep stoic expressions, laughing anytime one of them broke their “serious” look.

After some more family pictures in the sun, donning their sunflower bouquets and boutonnieres, everyone headed to Piggy’s Restaurant, where the reception was in full swing. There were plenty of cupcakes to choose from for after dinner, including “Hot Cococa”, and “Salted Carmel” varieties. We had the pleasure of meeting many of the bride and grooms family members at the intimate celebration, all there to celebrate the bond between Mr. & Mrs. Sell, and reunite with their loved ones for the special occasion.

Speeches from some of the bridal party were kept short but sweet, wishing the newlyweds happiness and laughter for years to come. Stefani and Shawn shared their first dance together as husband and wife, captivated by nothing but themselves as they laughed and swayed in each other’s arms. The bride surprised her mother once more, inviting her onto the dance floor for a memorable mother-daughter dance during the reception.

The couple snuck outside together with us as the sun was about to set on historic downtown La Crosse, and they didn’t shy away as Ben suggested heading all the way atop a parking ramp…and then atop a cement boulder…for some breathtaking sky shots. As they counted to three, Shawn lifted Stefani up and held a hand until she was balanced above him in her cute red high heels. Shawn even joined Stefani up there for a few photos! Their adventurous spirits led us to several other spots in downtown La Crosse, including the formerly-known Sawtooth Sam’s (now called Legends), where the couple share fond memories, and down to Riverside Park, with a view of the Mississippi River and the big blue bridges, just in time for sunset.

This is part of my Pump House weddings. I hope you enjoy.